Magenta and Big Red compete for your wireless business. But which stock is more attractive for your portfolio?

If you're a smartphone owner living in the U.S., there's a good chance you're either a T-Mobile (TMUS -2.66%) or Verizon (VZ 0.40%) customer. The two telecom giants collectively boast more than 160 million wireless customers -- about half the nation's population.

But which is the better pick for investors? Let's take a closer look at each business, comparing valuation metrics and assets to see which one may be more attractive.

A pure wireless play vs. a more diversified telecom
T-Mobile's business is fairly straightforward. It's the country's third-largest provider of wireless services. Virtually all of T-Mobile's revenue is generated from its base of some 63 million customers, who rely on T-Mobile's nationwide network mostly for their smartphones. T-Mobile's customers vary, but all generally fall into one of three categories: postpaid, prepaid, or wholesale.

T-Mobile's postpaid customers represent its core business: They generated about 66% of the company's revenue in 2015. They pay their bills at the end of each billing period, and often stay with T-Mobile for long periods of time. Generally, they're more creditworthy than their prepaid counterparts, and although T-Mobile has long since done away with traditional, two-year contracts, its postpaid customers are the only ones who can take advantage of its phone financing plans.

T-Mobile's prepaid customers, in contrast, pay their bills at the beginning of each period, and purchase their handsets upfront. T-Mobile has a prepaid service of its own, but also operates the MetroPCS brand. Prepaid customers brought in 30% of the company's revenue in 2015. The remaining 4% came from its wholesale customers -- operators of mobile virtual networks that rely on T-Mobile's service. In 2015, T-Mobile's business brought in just over $32 billion, and generated operating income of just over $2 billion.

Verizon's wireless business is similar, albeit larger, and the vast majority of its customers (95% of its retail connections) are on postpaid plans. However, Verizon also notably has a large hardline business, through which it provides home phone, TV, and broadband Internet to a base of several million residential customers. It also offers IT and data services to large businesses. Collectively, these services generated about 29% of the $131.6 billion Verizon's business brought in during 2015 (the rest came from its wireless offerings). In total, Verizon generated $33 billion of operating income last year.

There's also a major difference in the ownership of the two companies. German giant Deutsche Telekom owns the majority of T-Mobile, and controls its board of directors. Moreover, so long as Deutsche Telekom owns at least 30% of the company, T-Mobile needs the firm's permission to engage in certain activities, such as replacing its CEO, taking on excessive debt, or spending more than $1 billion to acquire a company. T-Mobile's management, then, may act in ways that benefit Deutsche Telekom at the expense of its other shareholders.

T-Mobile is more expensive
Both firms are profitable, so investors can use traditional metrics to assess their relative valuations. On a trailing price-to-earnings ratio, T-Mobile is far more expensive than Verizon (its P/E of near 47 dwarfs Verizon's 12.37). However, in the telecom industry, PEs can be deceiving. Massive networks require continuous, large investments in infrastructure, which, over time, result in significant depreciation. For that reason, comparing enterprise value (the total value of the firm) to EBITDA (earnings before interest, taxes, depreciation, and amortization) is often thought to provide greater insight. On that basis, T-Mobile is still more expensive than Verizon, though to a much lesser extent. 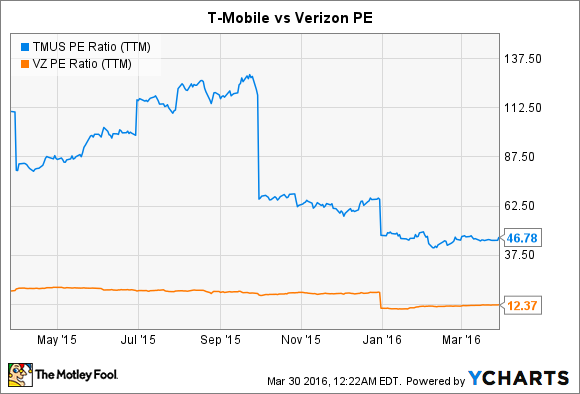 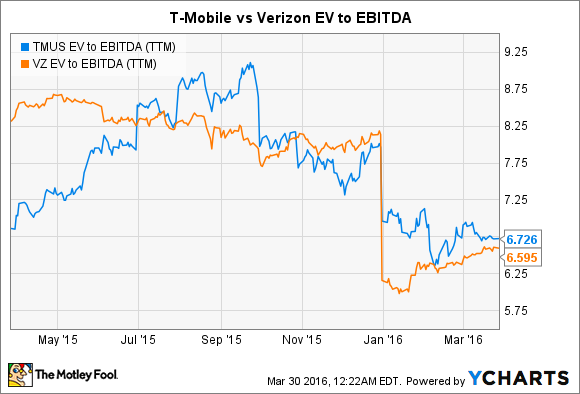 Verizon also beats T-Mobile when it comes to income generation -- often a top priority for telecom investors. Verizon currently yields an attractive 4.22%; T-Mobile doesn't pay a dividend. T-Mobile's valuation, despite its reluctance to return capital to shareholders, has been driven by its more impressive growth and the possibility that the firm could be acquired. Deutsche Telekom has been actively shopping T-Mobile for several years, making no secret of its desire to sell the company.

T-Mobile is definitely the more exciting telecom, but Verizon is more established and more reliable. For investors looking to add a telecom stock to their portfolio, it may be the better pick.

Sam Mattera has no position in any stocks mentioned. The Motley Fool owns shares of and recommends Verizon Communications. We Fools may not all hold the same opinions, but we all believe that considering a diverse range of insights makes us better investors. The Motley Fool has a disclosure policy.