The Palmetto Pipeline is halted due to eminent domain dispute.

According to news reports, Kinder Morgan (KMI 1.50%) has suspended work on the company's proposed Palmetto Pipeline project. It's in response to the passage of a temporary moratorium on the use of eminent domain for pipeline construction in Georgia. As such, the $1.1 billion project won't be going into service at the end of next year as initially planned, though given the project economics and the current industry conditions, that might not be a bad outcome.

What's going on?
The Palmetto Pipeline project was initially given the green light by Kinder Morgan in late 2014. It was designed to transport 167,000 barrels per day of refined petroleum products from the Gulf Coast to markets in the Southeast. However, its pathway, which will take it through 201 miles of eastern and coastal Georgia, has drawn opposition from local residents and environmental groups in that state. 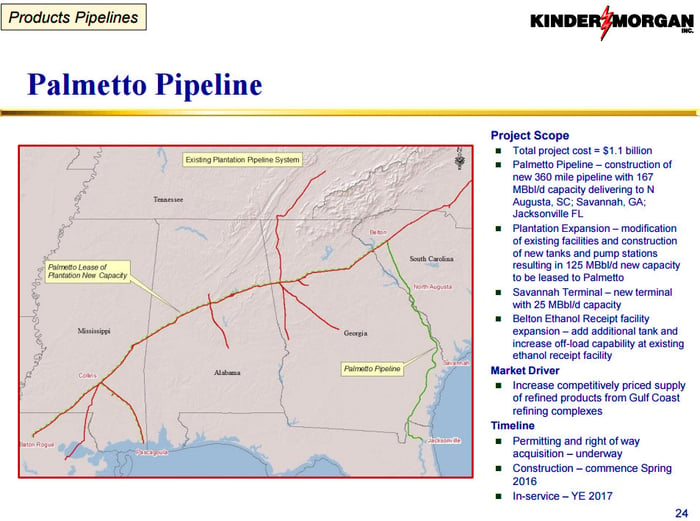 Because of that opposition, the General Assembly of the state of Georgia recently passed a temporary moratorium on the use of eminent domain for pipeline construction while it commissions a study to review the project. That effectively knocks the project out of service for at least the next year because it needed to use eminent domain to lock up some of the land for that pipeline's proposed route.

This isn't the first time the company has had issues with getting one of its pipelines built. It is currently facing intense opposition in Canada to expand its Trans Mountain pipeline. Furthermore, it's not the only pipeline company to face opposition, with Canadian rival TransCanada (TRP 0.73%) the poster child for pipeline problems. TransCanada spent six years trying to build the southward-bound Keystone XL pipeline before the project was ultimately rejected. When that project was delayed, it turned its attention to building an eastward-bound pipeline in Canada, only to face opposition in that direction as well. That opposition is a big reason why TransCanada is trying to buy growth, because it's having such a hard time building it.

While the company doesn't give project-specific economics, it does note projected returns for projects within its products pipelines segment. Given this, we can see that the company was expected to invest $524.7 million to fund its 51% share of the project. Also, that investment, as well as its other products pipeline segment investments, are expected to deliver an EBITDA multiple of 10.7 times as noted on the slide below: 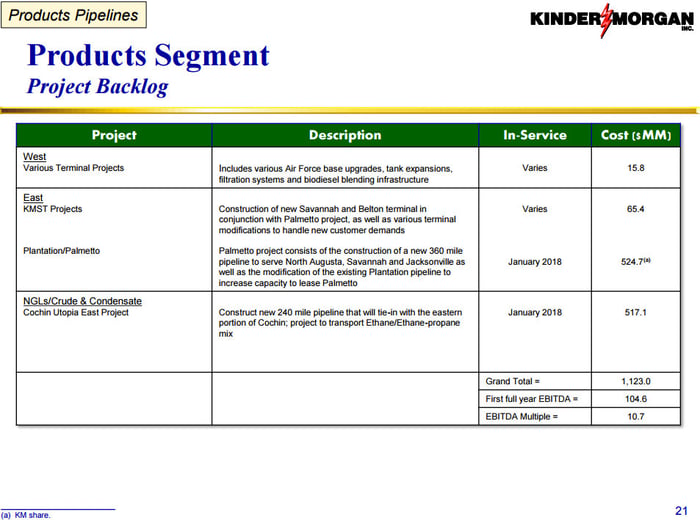 While that's not a bad return, just to put that number into perspective, projects put into service in the products pipeline segment last year cost the company $771.3 million but are expected to generate $147.4 million in first-year EBIDTA. That's a 5.2 times multiple or about twice as good as what Kinder Morgan had expected to earn on Palmetto and the other projects listed. So, it is worth noting that this appears to be a lower return project for the company.

Furthermore, the company was expected to invest a combined $344 million on products pipelines capex this year. Assuming less than half of that capital was allocated to Palmetto, the company could save about $150 million in capital this year by suspending this project. With the tight capital markets, not having to spend that capital right now might actually be a blessing in disguise.

Investor takeaway
Pressing pause on the Palmetto Pipeline project is actually a good thing for Kinder Morgan. Not only do the returns not appear to be as compelling as some of its other recent projects, but it now won't have to spend this capital right away. That gives it some extra financial flexibility at a time when it's at a premium.