Monsanto does fancy things in the agriculture arena, here are five charts to help you understand the opportunity

Monsanto Company (MON) is probably best known for its seeds and pesticides. This is a huge and increasingly important business, not just for Monsanto, but for the world. And that makes Monsanto an interesting way to play global growth. Here are five charts that show why.

1. We need more food
According to the United Nations, by 2030 there will be roughly 8.5 billion people on planet Earth. That's up about 15% from today. And that growth doesn't stop, with nearly 10 billion people expected to be alive by 2050. That's a lot of mouths to feed. And that's where a chart from fertilizer manufacturer Mosaic (MOS 2.86%) comes in: 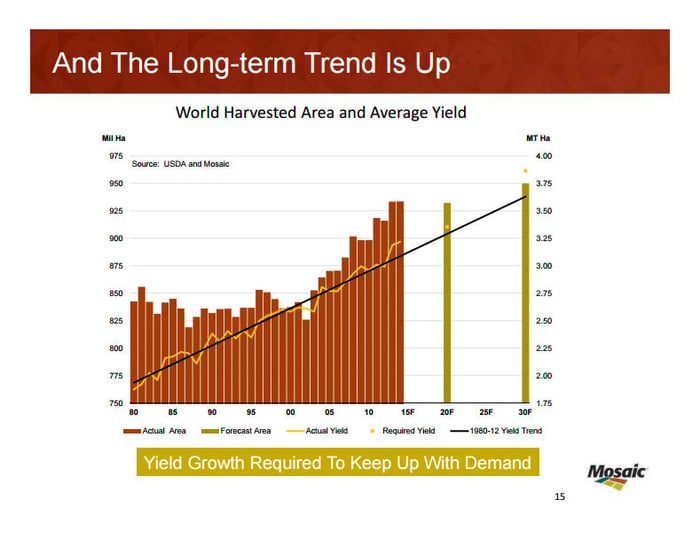 The important information to glean from this chart is that the swift growth in farmland that occurred from 2000 or so is set to flat line over the next several decades. That means higher yields will be needed to supply the projected global population. This is why the yellow line is expected to keep going up even though world harvest area growth slows down. Mosaic's answer to increasing crop yields is by adding more fertilizer, which works. But Monsanto believes there's another way -- better seeds and pesticides.

2. Room for improvement
The second chart comes from fertilizer maker PotashCorp (POT). It shows just how far behind the "yield" curve some countries are, most notably on the African continent. Yield is basically how much grain a country is able to produce from an acre of land. The yield metrics are on the right-hand side. 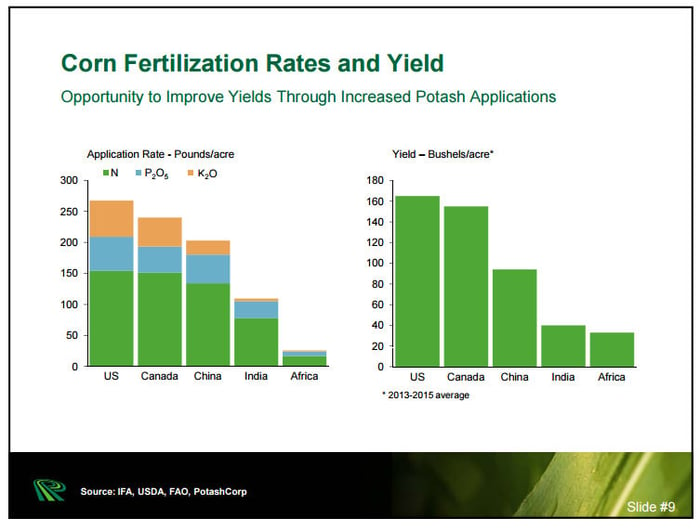 Notice how far ahead the United States and Canada are. Granted, both of these nations make extensive use of fertilizers (shown on the left-hand side), which highlights the potential for Potash and Mosaic, but that's not the only modern farm technology being put to work in these developed markets. So getting other parts of the world up to snuff is going to be a mixture of things, including better seeds and pesticides.

3. So what about these seeds?
Finally we get to a chart from Monsanto. The chart is a year-by-year comparison of Monsanto's Dekalb seed brand versus competitive products in the United States. It's pretty impressive. 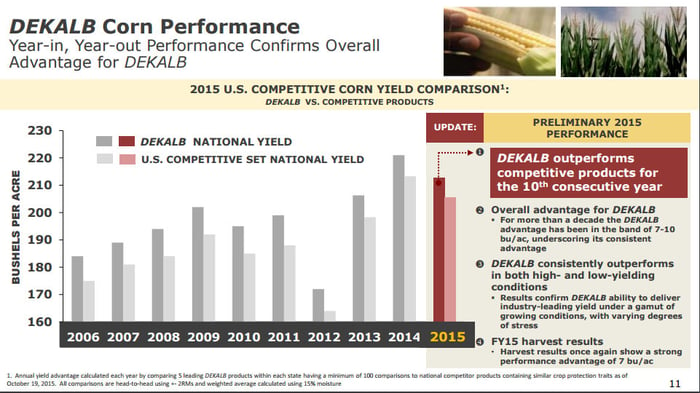 For 10 consecutive years Monsanto's high-tech seeds have produced more product per acre than other options. So, Mosaic and Potash can certainly help farmers improve their crop yields, but so, too, can Monsanto. Basically, Monsanto is engineering seeds so that they can produce more per seed, better withstand climate and weather variations, and be less susceptible to disease and parasites.

4. R&D is the key
While Mosaic and Potash both invest in research and development, a lot of what they do is simply mining. Not so for Monsanto: A lot of what it does takes place in a lab. Basically, it's engineering better seeds, using a process of genetic modification. That said, some people object to what the company is doing with its seeds. But seeds are just one of the high-tech areas that Monsanto is working in. For example, it's also pouring money into the "Internet of agriculture" and pesticides, among others. Really, Monsanto is using science and technology to make farming better. 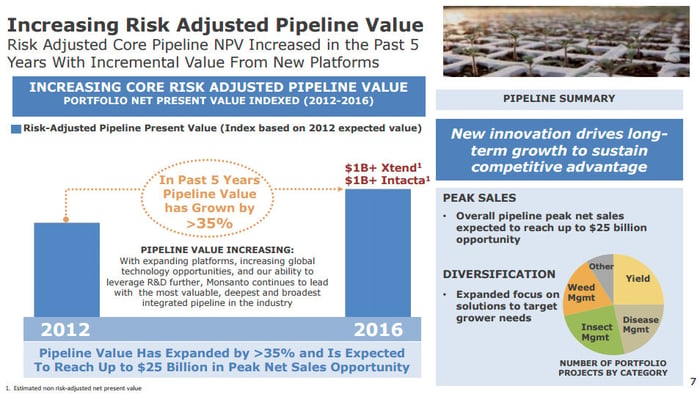 There are two things worth noting on this chart. First is the pie chart on the right-hand side, which shows the company's diversification in R&D. Seeds are important, but Monsanto really does a lot more than that. The second takeaway is that in just a few years, Monsanto's investment in research has led to a large increase in the expected value of its pipeline products. In other words, R&D is making Monsanto's future look increasingly bright while it helps to meet the world's growing need for more food.

5. Good, bad, and farming
The last chart is also from Monsanto, showing its financial results over the last few years. The trend has been decidedly higher on the earnings front. That's the good news, which also happens to show the potential for the company's products to benefit the bottom line. 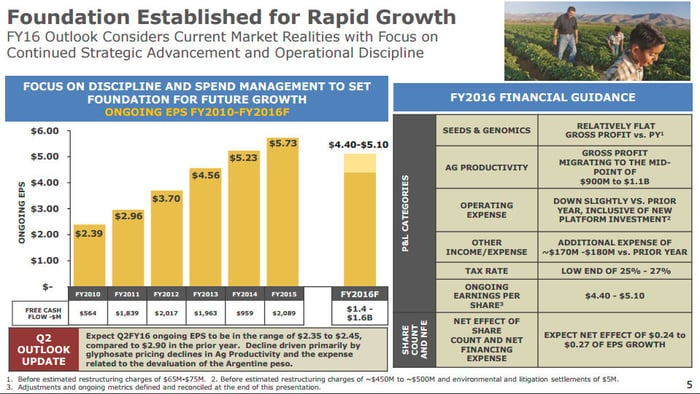 The bad news, however, is that 2016 isn't likely to be a good year for the agricultural technology company. In fact, the earnings guidance of $4.40 to $5.10 a share it recently provided is down from January when it expected earnings to be between $5.10 and $5.60 a share. So not so good right now, but that could open up a buying opportunity since the shares are down around 25% over the past year or so.

Part of the problem today is that farming isn't exactly a smooth businesses. The food farmers produce is a commodity subject to supply and demand, and weather plays an outsize role in farming results. These facts, in turn, have an impact on demand for Monsanto's high-tech seeds and other products, like the fertilizers that Mosaic and Potash sell. There's not a lot that can be done about that. But as these charts show, there's a huge long-term need for the types of products that Monsanto and its heavy research spending offers. That's why downturns should look like buying opportunities for investors taking the long view.