A quick rundown of the nation's largest cable companies. Cablevision (NYSE: CVC) is one of the nation's largest cable providers. If you live in or near New York City, you may be familiar with the company. It sells television, voice, and Internet services to several million customers in the Mid-Atlantic region under the Optimum brand.

But what about the stock? In the next five minutes, you'll gain the knowledge you need to assess the firm and the factors driving its business.

TV, Internet, and newspapers
Cablevision's business is fairly straightforward. The company has three operating segments: Cable, Lightpath, and Other.

Cable is by far the most significant aspect of Cablevision's business. Last year, it generated about 90% of the company's revenue. As its name implies, Cablevision's cable segment is composed of its cable operations -- the paid-TV, Internet, and voice services it sells to residential customers in New York, New Jersey, Connecticut, and Pennsylvania.

At the end of 2015, Cablevision had just over 3.1 million customers in total. Of those, just under 2.6 million received its paid-TV service, and just over 2.8 million subscribed to its Internet service. Around 2.2 million households depend on Cablevision for their home phones. Cablevision's customer base is growing, albeit slowly -- it gained 13,000 new customers between the end of September and the end of December. It lost 10,000 paid-TV subscribers, but added 25,000 Internet customers and 5,000 voice accounts. Cablevision's cable operations compete with other providers, most notably Verizon Fios. Cablevision's management estimates that Verizon's paid-TV and high-speed services are accessible to about half the company's customers. Still, Cablevision has about a 60% penetration rate in the areas it serves.

In its fiscal year 2015, Cablevision posted consolidated net revenues of $6.5 billion and operating income of $197.1 million.

Dolan ownership and the planned acquisition
There are two other facts about Cablevision that investors should know.

First, Cablevision shares have been trading around $33 for the last six months. That's because, in Sept. 2015, European communications firm Altice entered into an agreement to purchase Cablevision for $34.90 per share. Altice could merge Cablevision with Suddenlink, another regional player it acquired last year, to create a much larger cable provider. Cablevision investors, however, will only receive cash.

Cablevision is more expensive than Time Warner Cable and Dish Network
Time Warner Cable (NYSE: TWC) and Dish Network (DISH -2.87%) are much larger firms than Cablevision, with operations in many more geographic regions. But their core businesses are roughly comparable, and on that basis, they can be compared. Fortunately, all three firms are profitable, and can be valued under traditional metrics, including trailing price-to-earnings ratio. 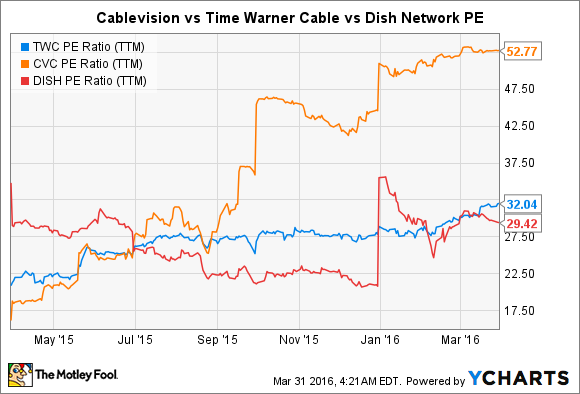 On that basis, Cablevision is considerably more expensive: its P/E ratio of 52.77 dwarfs Time Warner Cable's 32.04 and Dish Network's 29.42. But that spike in valuation came only after the company entered its agreement with Altice. Prior to that, its P/E ratio of near 27 was largely in line with those of its competitors.

Cablevision is a company facing a unique circumstance -- its looming merger will determine its performance much more than the strength of its operations. Its Altice deal has yet to close, but if it does, investors are looking at about a 6% upside from current prices. Should the deal fall through, Cablevision stock could tumble, perhaps back to its pre-merger price of around $25 per share.