Please ensure Javascript is enabled for purposes of website accessibility
Log In Help Join The Motley Fool
Free Article Join Over 1 Million Premium Members And Get More In-Depth Stock Guidance and Research
By Travis Hoium - Apr 2, 2016 at 10:21AM

After a great run, these are catalysts that could push the video game maker's stock even higher.

Making the transition from traditional video games to the new world of online game-play, mobile gaming, and digital downloads hasn't been kind to a lot of developers. But Activision Blizzard (ATVI 0.91%) has fared well because of the success of long-running franchises like Call of Duty, World of Warcraft, and Guitar Hero. We don't know what the future holds, but here's what could keep that momentum going. 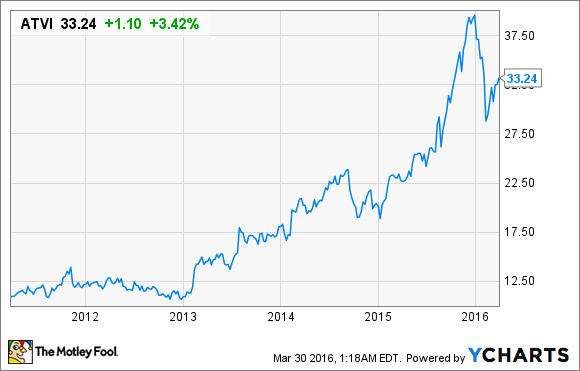 Digital revenues could take off
in 2015, digital sales accounted for 37% of Activision Blizzard's non-GAAP revenue, but that percentage should rise significantly this year. The company recently bought King Digital Entertainment for $5.9 billion, instantly making itself one of the biggest mobile game makers in the world.

The expectation is that King Digital will help push revenue from $4.62 billion on a non-GAAP basis in 2015 to $6.25 billion in 2016. That'll largely be driven by digital revenues, and if growth exceeds expectations, the stock could take off.

What'll be key to watch is how the company uses its digital platform to drive growth. Obviously, in-app purchases have been a big moneymaker for King Digital, and expansion packs have worked well for Activision Blizzard. Keeping the momentum going in those areas, and maybe even adding a revenue stream (such as streaming game videos) has to be a goal for the company.

The Whispers of the Old Gods expansion pack for Hearthstone is the latest release from Blizzard. Image source: Activision Blizzard.

A new platform could rise
It's clear that most casual gaming is moving from consoles to mobile devices or multi-purpose media platforms. For example, Apple is pushing the Apple TV into the media device/gaming device space now that it has its own app store.

Activision Blizzard was one of the first to release games for the Apple TV, but the device's installed base is still too small to make a dent in the company's business and console-level capabilities aren't available yet for Apple TV. But there's potential there.

Even virtual reality games could be a growth market, although that's probably years away.

Eventually, a device (or a series of devices) will fill the void, effectively replacing the gaming console as we know it. When that happens, it will allow for cheaper delivery of content and even easier in-game add-ons that have been so popular on mobile devices. And Activision Blizzard will be well-prepared when that transition takes place.

A new hit game could soar
What could really boost Activision Blizzard's stock price is a new hit game. The one with the best potential to be that hit in 2016 is Overwatch. It's another team-based, first-person shooter, and if positive reviews hold, it could be a huge seller.

King Digital could also bring a hit to the company, although it's unclear right now what that game would be. Paradise Bay has gotten good reviews, but isn't cracking the top-grossing games list right now. And with the Candy Crush line aging, the business is in need of a refresh soon.

Predicting which titles are going to be blockbusters is probably the most difficult thing to do in the game business, but it's also what has the near-term potential to drive Activision Blizzard stock up the fastest.