Please ensure Javascript is enabled for purposes of website accessibility
Log In Help Join The Motley Fool
Free Article Join Over 1 Million Premium Members And Get More In-Depth Stock Guidance and Research
By Andrew Tonner - Apr 2, 2016 at 11:27AM

The lower profit margins for new entry-level iPhone may worry some Apple-watchers, but they fit perfectly with the firm's growth strategy.

Though Apple by no means debuted anything astounding, its largely derivative new iPhone SE and iPad Pro are still likely to carry some key business implications, particularly for its all-important smartphone segment. More specifically, the iPhone SE is likely to cut into Apple's margins to some degree in the near term. However, of far greater import, the device's benefits should far outweigh its costs over the long term.

iPhone SE margin impact
Though its screen was the most readily observable thing Apple shrunk on the new iPhone SE, it was hardly the only thing that Apple made smaller.

Apple also lowered the upfront price to $399 for the 16 GB version and $499 for the 64 GB version. Effectively powered by the same innards  as the firm's flagship iPhone 6s, the iPhone SE will cost roughly 27% less than its larger smartphone brethren when it officially goes on sale.

In doing so, Apple has shifted its pricing strategy away from using older iPhone models as the gateway devices into its ecosystem to offering cheaper editions of its most current technology, which has some camps concerned over the phones' overall profitability. Estimates currently peg the bill of materials for the iPhone 6s to be $211.50, though the iPhone SE likely costs slight less to produce.

For argument's sake, let's assume parts and assembly for an iPhone SE cost an admittedly imprecise, but practical $200, based on its smaller, less pixel-laden display and its older case design. Though inexact, this plausible working estimate implies a per-device gross margin of 50% for the iPhone SE, which compares unfavorably to the rest of the iPhone lineup.

Viewed this way, the iPhone SE seems like a relatively unpalatable option for Apple and its shareholders. Crucially though, that chart only tells half the story.

Not 2013 all over
The prospect of tighter margins for Apple has some more tenured investors and observers understandably spooked. Those of us who have followed the company for long enough remember its 2013 sell-off, in which margin contraction issues also played a pivotal role. 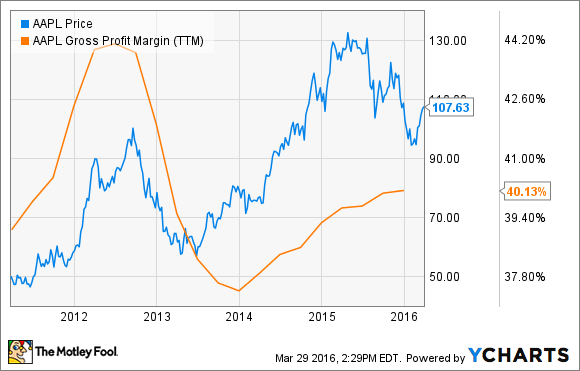 Thankfully, a similar scenario is unlikely to unfold in the coming weeks, for several reasons. For starters, Apple's 2015 annual iPhone unit sales were roughly 53% greater than its 2013 iPhone sales.

Apple disclosed that it sold 30 million 4-inch iPhones in 2015, and its fair to expect it to sell even more SEs than that in 2016, due to their competitive prices and improved hardware. However, the truly massive scale of Apple's iPhone business today should help insulate the firm from any kind of material impact.

What's more, the timing of the iPhone SE launch should also prove a mitigating factor in preventing a margin meltdown similar to 2013 from occurring. Though it's early in the year, we're likely only six months away from the expected debut of Apple's iPhone 7, which should help drive renewed interest in Apple's larger, more profitable models.

Taking a longer-term view, the iPhone SE is likely to prove a valuable tool in pulling new consumers into Apple's ecosystem. As VP of Product Marketing Greg Joskwiak mentioned at the SE launch event, the 4-inch iPhone has proven particularly popular in key emerging markets like China. Viewed through this lens, the iPhone SE appears most likely to become the entry-level iPhone in coming years, which should help the firm compete with Android phones in emerging markets. And given the strength of Apple's ecosystem in retaining customers, this new carrot will likely serve Apple well in years to come.