It was a terrific week to be a healthcare investor, but the performance of this one ETF was simply outstanding.

It was a terrific week to be an investor who focuses on the healthcare sector, as the majority of the exchange-traded funds that invest in the space roared past the returns of the S&P 500. One fund in particular, the SPDR S&P Biotech ETF (XBI -0.27%), put up a monster performance, soaring 6.41%. 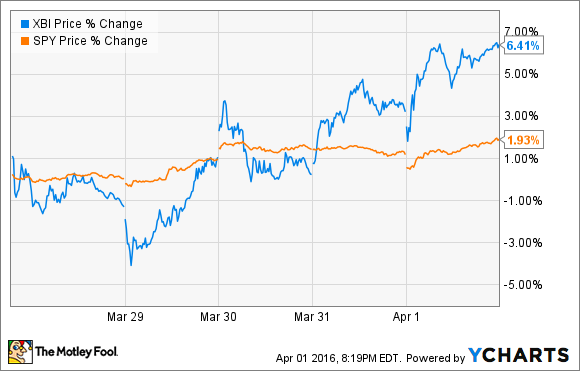 Let's take a closer look at the inner workings of this ETF to see if we can figure out how it managed to post such a huge gain.

Breaking it down
As its name implies, the SPDR S&P Biotech ETF holds a variety of companies from the biotechnology sector, a part of the market that tends to be much more volatile than average. When the markets head higher, as they did this week, biotech stocks tend to outperform, but when the markets catch a cold the sector tends to get the flu.

Here's a overview of a few key statistics of this fund.

One attribute that distinguishes this fund from other biotechnology ETFs is that it follows an equal-weight strategy. That means it invests the same amount of capital into each of its holdings and then rebalances itself quarterly, helping to ensure that it doesn't carry excess exposure to any one company.

What went right this week?
You know it's a going to be a good week for an ETF when the worst performing stock in its top holdings still put up a weekly gain of more than 3%. And that return wasn't even in the same ballpark as its best-performing stocks. ACADIA Pharmaceuticals (ACAD -1.87%) and Medivation (MDVN) each rose by double digits this week. 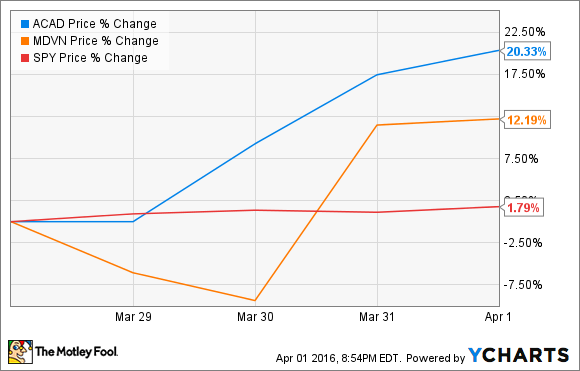 Medivation's stock jump appears to be caused by rumors that the company could be an acquisition target. Reuters reported that the company has hired JPMorgan Chase to help it handle any inquiries it receives from large players in the space, although "people familiar with the matter" claimed that the company has no plans to sell itself. Still, that didn't stop investors from taking shares higher over the past few days.

The enormous jump in Acadia's stock was caused by a positive FDA advisory committee vote for the company's experimental drug, Nuplazid, which is currently pending approval as a treatment for Parkinson's disease psychosis. In a 12-to-2 vote, the panel said the benefits of using Nuplazid outweigh its potential risks, which bodes well for the chances that the drug will gain approval.

Nuplazid has a PDUFA date of May 1, so investors won't have to wait long before they find out if the agency gives the drug a nod. But since there are currently no approved drugs to treat the disease on the market, I like Nuplazid's chances.

If the compound does win approval, it will be a thesis-changer for Acadia, as analysts believe that peak sales of Nuplazid could be in excess of $3 billion. That might even prove to be a conservative number, considering Nuplazid is also being studied as a treatment for other diseases, such as Alzheimer's disease psychosis and schizophrenia. If regulators approve it for Parkinson's disease psychosis, that may increase the odds of its winning other indications as well, so it's easy to see why investors sent shares screaming higher.

Now what?
Biotech stocks have been horrendous performers year to date, so this huge weekly jump should serve as some relief for investors who have been bludgeoned. However, they're still a long way from being made whole. Even after including this week's terrific performance, the XBI is still down more than 24% since the start of the year.