Please ensure Javascript is enabled for purposes of website accessibility
Log In Help Join The Motley Fool
Free Article Join Over 1 Million Premium Members And Get More In-Depth Stock Guidance and Research
By Andrew Tonner - Apr 2, 2016 at 9:20AM

With the Asian market for mobile games set to explode in coming years, both Sony and rival Nintendo are forming plans to cash in.

Thanks to a fantastic last month, shares of longtime laggard and gaming giant Sony (NYSE: SNE) suddenly show a bit of swagger to their step. Just see for yourself. 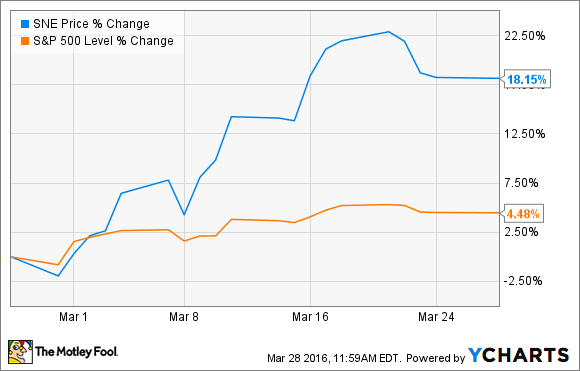 Thanks to wins across its diverse business units,  Sony's shares have soared in recent weeks, particularly on the strength of the firm's mid-March virtual reality headset preview.  However, Sony most recently impressed investors when it outlined its plans to grab a greater share of the booming mobile games market.

ForwardWorks' founding
According to a press release from the firm , Sony will formally launch a new video game initiative on Friday . The new subsidiary will operate under the name ForwardWorks, under the control of the recently established Sony Interactive Entertainment subsidiary, which Sony created to help expedite product development across its increasingly broad set of entertainment platforms.

From a strategic perspective, Sony created FowardWorks in order to tap into the high-growth market for mobile games across Asia. According to the press release , "ForwardWorks will leverage the intellectual property of the numerous PlayStation dedicated software titles and its gaming characters as well as the knowledge and know-how of gaming development expertise ... to provide gaming application optimized for smart devices including smartphones to users in Japan and Asia." Said another way, ForwardWorks exists to produce console-quality games for Asian smartphone and tablet users.

This move in some ways mirrors a similar strategic initiative from Sony's Japanese gaming rival Nintendo (NTDOY 1.81%), which recently unveiled its Miitomo mobile app.  Nintendo's Miitomo app aims to also rally the firm's user base on mobile devices. However, unlike Sony's mobile development efforts, Nintendo's Miitomo serves as  a social experience among Nintendo users with the presumable intention of driving sign-ups to the firm's rewards program. To be sure, Sony's strategy seems far more understandable than Nintendo's, which seems only indirectly tied to the business of selling games. Either way though, these combined moves do speak to the increased emphasis on creating mobile experiences on the parts of Sony and Nintendo.

Inside the mobile gaming boom

The companies' pivots toward mobile gaming reflect a broader shift in the video game world. Some markets, like Japan, already enjoy relatively mature mobile gaming ecosystems. For context, the Japanese mobile gaming market is the largest globally, generating approximately $6.8 billion in annual revenues according to research firm CyberAgent . However, the explosion of mobile gaming in other Asian markets, particularly China, makes it too compelling an opportunity for Sony and Nintendo to pass up.

This year, sales from mobile games are expected to increase 32% to $6.5 billion in China, which will surpass the U.S. as the second-largest mobile gaming market in world. What's more, Chinese mobile gaming revenue could rise to as much as $28 billion by the 2017, according to Chinese firm iResearch . China's bias toward mobile gaming is at least in part due to a 14-year ban on non-Chinese gaming consoles, which kept the leading consoles from being sold legally in the world's most populus nation. This inevitably tilted Chinese gamers toward desktop computers and, more recently, mobile devices.

As Sony and Nintendo ramp up their new strategic emphasis on mobile games in Asia, they will face a fair amount of entrenched competition. China is home to a strong ecosystem of domestic game developers, many of which have their own international ambitions . However, thanks to their strong portfolio of legacy games, it's not unreasonable to think both Sony and Nintendo will be able to compete effectively for market share in China's booming mobile gaming sector. So while only time will tell to what degree they can monetize this growing trend, these new forays into mobile gaming appear to be wise for both companies and their investors.