Please ensure Javascript is enabled for purposes of website accessibility
Log In Help Join The Motley Fool
Free Article Join Over 1 Million Premium Members And Get More In-Depth Stock Guidance and Research
By Timothy Green, Matthew DiLallo, and Brian Feroldi - Apr 3, 2016 at 11:44AM

Investors should always consider the quality of a company's leader before buying its stock.

Having a great CEO is only one of many factors that determines a company's success. As Warren Buffett once said, "When a management with a reputation for brilliance tackles a business with a reputation for bad economics, it is the reputation of the business that remains intact." But when a great company is paired with an amazing CEO, incredible things can happen. Here are three traits that a few of our Foolish contributors believe separate amazing CEOs from the rest.

Tim Green: A CEO needs to be an optimist to be an effective leader and rally the troops, but optimism can quickly get out of hand. I think one trait of an amazing CEO is a sense of realism. A typical earnings report from a company that's performing poorly is quick to point out all the positives, and just as quick to blame all the negatives on external factors. Take this statement from the former CEO of RadioShack's earnings report from June 2014, only about eight months before the company declared bankruptcy:

Even in this environment, we are making progress on our turnaround strategy. We are building the pipeline of new products that will bring differentiation and newness to our stores in the form of high-margin private brand and exclusive items, including those from new partnerships like Quirky and PCH. Our concept stores continue to drive strong sales growth, and we have begun to execute our 100-store remodel program to scale the successful components of our concept stores across our network.

The turnaround is always making progress, and it's always the environment that's the problem. At this point in RadioShack's story, comparable-store sales were plummeting every quarter, losses were growing, and the company's cash was nearly gone. Bankruptcy was almost a foregone conclusion, but you wouldn't know it by listening to the CEO.

Compare that statement with this one, from Best Buy (BBY 4.77%) CEO Hubert Joly soon after he took over the struggling company in 2012:

While we are the 11th largest e-commerce player in the U.S. across all product categories, we have been too slow to capture our fair share of the online channel. While our customer satisfaction has been increasing in the last months, we have room for improvement. We have been suffering from a price perception issue. And, although our operating metrics are among the highest in the industry, our top line and bottom line performance have been declining. These trends, combined with the continued addition of stores well into the recession and the low returns achieved by certain acquisitions, have led to a decline in our return on invested capital.

Since then, Best Buy has staged a successful turnaround, driven by management focusing on the key issues that Joly discussed in that statement. It's part of a CEO's job to paint a rosy picture for investors, but aggressive sugar coating is a major red flag. I'll take a CEO who can admit mistakes and offer a realistic outlook over a pitchman any day.

Matt DiLallo: Going against what the rest of the industry is doing can be a sign that a company has an amazing CEO. Take the decisions of EOG Resources (EOG 3.19%) CEO Bill Thomas last year. With oil prices heading south due to an abundance of supply, Thomas made the decision that EOG Resources should slam the brakes on production growth. In fact, under his direction the company stated that it was "not interested in accelerating crude oil production in a low-price environment."

That was quite a difference approach from most of his peers, which continued to accelerate production growth. Devon Energy (DVN -1.77%), for example, grew its oil production 26% last year even though the oil market was vastly oversupplied. In a lot of ways, it was decisions like the one Devon Energy made that caused the oversupply to get worse, accelerating the slide in oil prices.

It was also a decision that came back to bite Devon Energy this year. After investing heavily to grow oil production last year, the company's finances have started to run dry, which forced it to cut back investment spending by 75% this year. Worse yet, Devon also slashed its dividend by 75% and had to sell $1.5 billion in stock to bolster its liquidity position. That stock sale came after its stock price had fallen more than 50% in the past year, heavily diluting investors.

EOG Resources, meanwhile, spent last year focused on improving its drilling returns instead of growing. As a result, it has been able to cut its spending by about half, while still being able to basically hold its oil production flat.

By going against the grain and focusing on returns over growth Thomas has actually led EOG Resources to a positive return in his tenure as CEO, despite crashing oil prices, while rival Devon Energy's stock has nearly been cut in half: 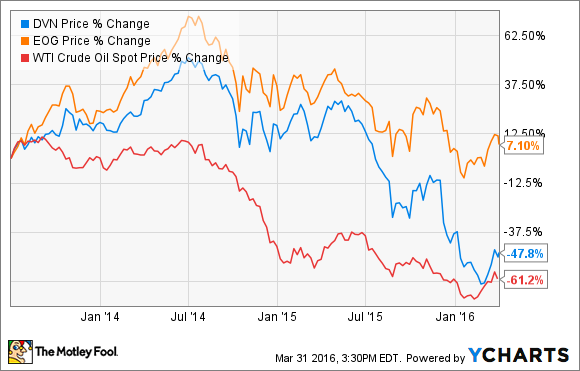 Brian Feroldi: One tell-tale sign that a company has an amazing leader is if the person who sits in the top chair is also a founder. Why do I think that qualifies a CEO to be called "amazing"? Consider how much effort and gusto it takes to start a company from nothing and turn it into such a success that it finds its way to the public markets. To make that happen, a founder probably poured all of his or her energy, talent, and capital into the company and in the process took an enormous personal risk. That it worked is a testament to just how dedicated and talented that person is, which greatly increases the odds that person is a great leader.

Another reason to like founder-CEOs so much is that they tend to motivated by much more than just earning a huge paycheck. After all, any founder who brings a company public is likely to have become extremely wealthy, and that person could have easily cashed in his or her chips at the IPO and retired to an island somewhere. Choosing to stick around and deal with the scrutiny of being public shows that person cares deeply about the long-term performance of the business.

There are plenty of great companies out there that are still run by their founder. Take investment research company Morningstar (MORN 2.97%), for example. Joe Mansueto founded the company in 1984, and its huge success has turned him into an incredibly wealthy man. Yet he's so passionate about his business that he still wants to hold the top chair. Perhaps unsurprisingly, Morningstar has been a wonderful long-term investment thanks to Mansueto's great leadership.

There are plenty of other great qualities to look for in a great CEO, but if the leader of the company is also a founder, I'd argue that increases the odds that you've got an amazing person in the top chair.