Can these three companies report bounce-back results in Q2? We're watching them closely for just that reason.

Investing in companies based on their long-term prospects is probably the best and most successful method for the vast majority of people. But at the same time, that doesn't necessarily mean you should buy a stock and then promptly ignore it for five years. Businesses can change, competitors can disrupt things, and new opportunities can arise.

Because of this, it's a good idea to keep an eye on a company's quarterly results. Not only can you keep an eye on the trends and make sure the business results are still on track, but it may give you clues either that things are falling apart or maybe that it's time to buy.

With that in mind, we asked three of our top contributors to name a stock they're watching closely in the second quarter, and they gave us three bounce-back companies that could be set to beat the market's expectations. More important, a strong quarter could be an indication that the long-term prospects are looking great for these companies, making for a solid investing opportunity. Here's what they had to say.

Worst over for Wynn?
Andres Cardenal: Wynn Resorts (WYNN 2.63%) is an interesting company to watch in the second quarter. The casino operator is being hurt by weak gaming demand in Macau, and this is taking a considerable toll on both revenues and profits. However, there are some reasons to believe the worst may be over in Macau, and Wynn Resorts stock could deliver big gains for investors if this turns out to be the case.

In mid-2014, the Chinese government started implementing a series of restrictions and regulations to fight corruption and illegal money laundering via casinos in Macau. This inflicted a lot of damage on all casino operators in the region due to falling gaming demand, and Wynn Resorts stock is still down by almost 60% from price levels in June 2014. 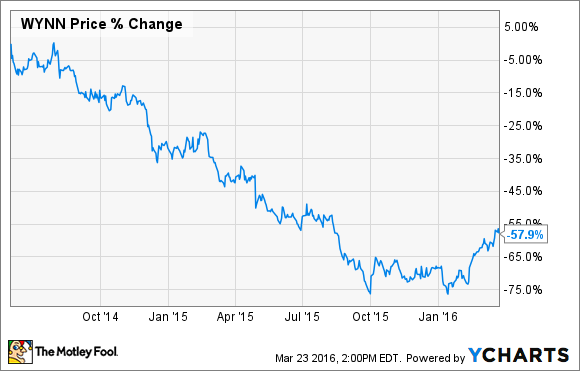 On the other hand, CEO Steve Wynn said in the latest conference call that demand was clearly improving in January, and official data is indicating that gaming activity in Macau could finally be stabilizing, as gaming revenue declined by a marginal 0.1% year over year during February.

Wynn Resorts makes more than half of its sales and profits from Macau, and the company has a big presence in the VIP market, which is particularly affected by the slowdown in demand. If things continue improving in Macau over the coming months, then Wynn Resorts will be one of the biggest beneficiaries, so the casino operator is a key name to watch in the medium term.

Stiff competition already priced in... or not?
George Budwell: The stock that has my full attention in the second quarter is Gilead Sciences (GILD 1.03%). Gilead is a blue chip biotech that sets the tone for the industry in many ways because of its explosive growth over the last five years. Unfortunately, the biotech has run into a bevy of headwinds in regard to its hepatitis C franchise lately that may weigh heavily on its shares moving forward.

Not only is AbbVie's competing therapy Viekira Pak starting to pick up sales momentum after an initially sluggish launch, but Gilead is now facing two monstrous threats from Merck & Co. Specifically, Merck recently launched its own hep C drug called Zepatier, and it won a key patent case in California that entitles the drugmaker to royalties from Gilead's hep C drugs, Sovaldi and Harvoni.

Here's the kicker -- these competitive threats may already be baked into Gilead's share price. After all, Gilead's shares have been trading at a highly compressed price-to-earnings ratio -- relative to its closest peers -- for months at this stage, implying that the market was anticipating a significant drop-off in the biotech's hep C revenue stream. Then again, this moody market may decide to push Gilead's shares down even further, and that may indicate that the biotech bull run really is at an end.

Will steady improvements continue?
Jason Hall: A stock I'm going to watch closely in the second quarter is one that I've watched closely every quarter for the past three years: Clean Energy Fuels Corp. (CLNE 5.03%). Why am I watching Clean Energy so closely? The company is in an interesting position right now, and I want to see how it's progressing in these key areas:

So far in the oil downturn, Clean Energy has continued to grow fuel volume sales as a number of vehicle fleet operators such as bus, solid waste, and some trucking operations continue to make the switch from diesel to natural gas. Volumes increased 16% in 2015, though it's expected that growth will slow some this year as oil prices remain down.

At the same time, natural gas has also remained cheap, and Clean Energy continues to cut costs and reduce capital spending, allowing it to focus on paying down $150 million in debt that's due in August. In early March, management said the company had already paid down and refinanced $60 million of that debt, and it said it would use a combination of cash and stock offerings to pay the balance.

I'll be watching closely this quarter to see how the company delivers on these four key things. Over the past year-plus, costs and capital spending have steadily fallen, growth has remained remarkably steady, and recently, debt has started to come down. If management can keep making improvements each quarter, the upside for investors could be huge.