Chances are, when you drive up to a McDonald's (NYSE:MCD) drive-through, you're not actually buying something from McDonald's; you're getting it instead from one of the burger giant's franchisees. All told, a full 82% of McDonald's restaurants are owned by franchisees, not the company itself.

That may sound like a lot, but it's actually a smaller percentage than McDonald's would prefer. The company's goal is to have 95% of its restaurants owned and operated by franchisees, leaving only 5% for the company to run. 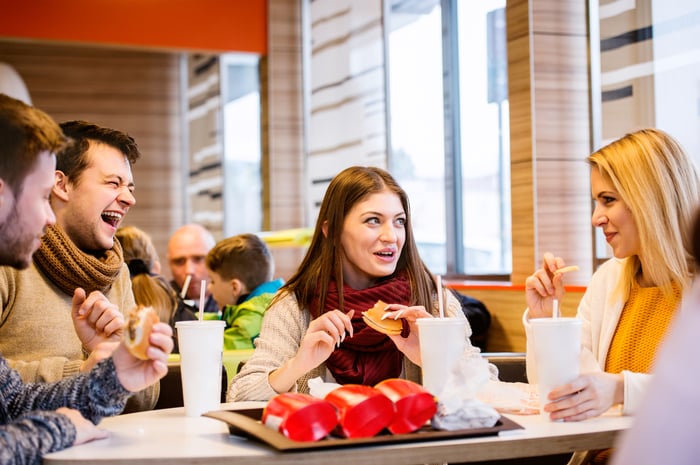 McDonald's discusses the benefits of this bifurcated ownership model in its latest 10-K:

Franchising enables an individual to own a restaurant business and maintain control over staffing, purchasing, marketing and pricing decisions, while also benefiting from the strength of McDonald's global brand, operating system and financial resources. One of the strengths of this model is that the expertise gained from operating company-owned restaurants allows McDonald's to improve the operations and success of all restaurants while innovations from franchisees can be tested and, when viable, efficiently implemented across relevant restaurants.

I drew up the chart below to give you a better sense for the distribution of ownership of McDonald's restaurants. As it illustrates, not all franchises are created equal. They're split instead into three different categories: conventional franchises, development licenses, and foreign affiliates. The three types of franchises are differentiated in large part by the party that's responsible for contributing the capital to build and operate a location.

When it comes to expansion, this business model allows McDonald's to have its cake and eat it, too. It keeps franchisees' skin in the game, reduces the amount of capital that McDonald's itself must dedicate to build new locations, but still allows the company to deploy a common set of standards, products, and procedures that are employed throughout the company.

This doesn't mean that everything will always go smoothly. Last year, sales fell at both its company- and franchisee-owned stores. However, it's the use of the franchise model that has powered McDonald's impressive returns over the past three-plus decades, allowing the company's stock to outdistance the S&P 500 by a factor of 12 since the beginning of 1980.