The biotech continues its climb off its post-clinical-trial-fail lows.

So what: Celldex's investors certainly like Mondays. Two weeks ago the stock started the week with a double-digit move higher -- also on no news. Shares in the biotech are now about 50% higher than their 52-week low.

Unfortunately, after the biotech's brain cancer vaccine Rintega failed a clinical trial last month, Celldex is still nowhere near its 52-week high, either. 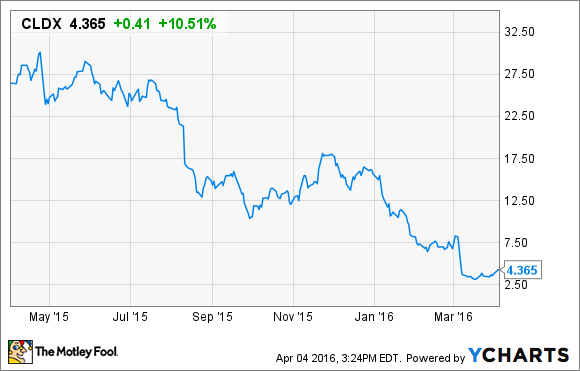 Now what: Celldex has other drugs in its pipeline besides Rintega. Glembatumumab vedotin provides most of the current valuation since the drug is already in a registration trial, testing the activity in a subset of breast cancer patients.

Unfortunately the METRIC trial in breast cancer isn't scheduled to read out until 2017. The drug is also being tested in a few other phase 2 trials in other cancers that could report data sooner and might increase the valuation some more.

But Celldex has a ways to go before it'll have a drug on the market, and given the waiting game, the biotech is likely to trade up and down on the whim of traders rather than the sentiment of long-term investors.