W.P. Carey's payout is juicy compared to some peers, but the company carries some unique risks.

On paper, it's an income investor's dream. Real estate investment trust W.P. Carey (WPC -0.59%) has increased its dividend every quarter since nearly the beginning of this century.

That's an impressive streak, but of course there are other factors besides a dividend to consider when looking at a stock. Let's look at some of the major ones to see if W.P. Carey is a buy for reasons alongside that levitating payout.

A different kind of REIT
Another element that sets W.P. Carey apart from its perhaps more prominent equity REIT peers is its diversification.

In the recent past, company management has opined that commercial real estate in the U.S. doesn't have as bright a future as it does in other parts of the world. As a result, over one-third of W.P. Carey's portfolio was located abroad, as of late last year. Its American properties, meanwhile, were spread fairly evenly throughout this country.

The REIT also doesn't lean too heavily on one type of property. Office real estate topped the list at roughly 30% of the portfolio, industrial is 25%, while warehouse and retail are in the teens.

Additionally, W.P. Carey brings in revenue as a creator and manager of non-traded REITs. That's not only atypical in the industry, it also acts as a hedge of sorts against the direct, traditional own-and-lease model for equity REITs.

This level of diversification has its advantages, but also its shortfalls. In theory, it insulates against a sudden drop in any one market or segment, of course, but at the same time limits upside. 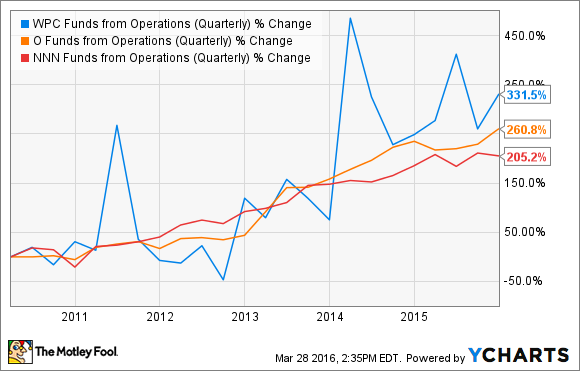 W.P. Carey's growth in quarterly funds from operations -- arguably the most important profitability metric for REITs -- trumps that of both Realty Income and National Retail Properties. That difference is even more pronounced for the three companies' top line figure. 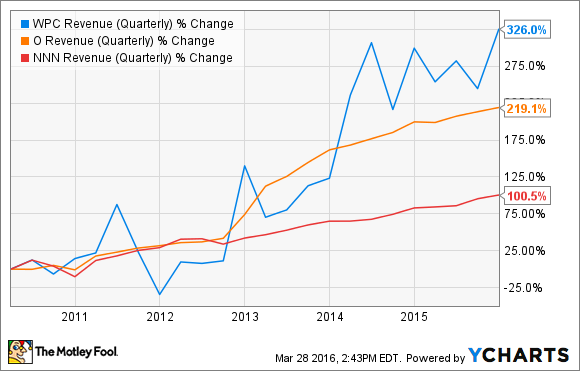 On the down side, W.P. Carey is more fond of debt financing, when we match its borrowings against total assets. 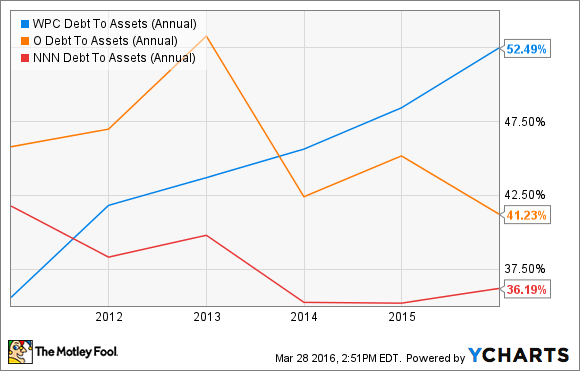 The REIT's total debt rose notably in fiscal 2015, increasing by nearly 10% from the previous year to almost $4.5 billion. It wasn't the only one to show a double-digit gain -- National Retail Properties saw a 13% increase over that stretch of time to just under $2 billion. On the flip side, Realty Income reduced its stack a bit, to $4.8 billion.

But W.P. Carey's trajectory is much steeper. Here's how those borrowings have developed so far this decade: 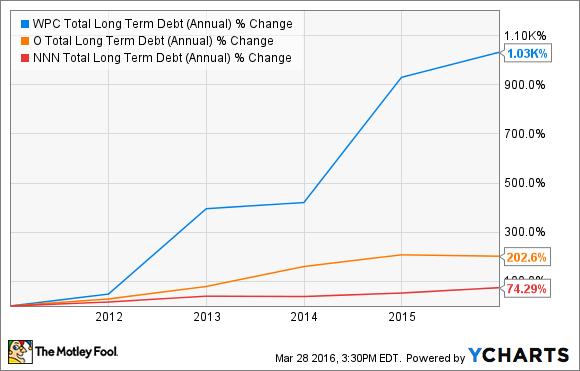 High REITurns
Of course, since REITs are essentially required to pay out the bulk of their earnings as dividends, the size and strength of their payouts are critically important to investors.

Due in no small measure to restructuring measures that are under consideration -- more on this in a moment -- W.P. Carey's stock price has trailed that of its two brothers so far this year, thus its dividend yield has risen.

Just now it stands at 6.3%, quite far above the 3.8% currently sported by both Realty Income and National Retail Properties.

But then again, the latter two REITs are not, as far as we're aware, considering a split into three component parts. That's what now-departed CEO Trevor Bond admitted late last year. In announcing his resignation in February, the company wrote that it is "continuing to review a range of strategic alternatives." So this obviously remains a possibility.

Either way, the future's a little cloudy for W.P. Carey just now.

I don't, however, think that makes it a stock to avoid. Many of the company's fundamentals are strong and encouraging, and despite a debt situation that I wouldn't mind seeing improved, the company has a business profile that is effective and unique for its industry. And I think it'll continue to do well, assuming it's not dashed apart too haphazardly.

So it's a good stock that looks cheap, but -- given the uncertainty hanging over it -- perhaps it's only suitable for investors with a higher-than-average appetite for risk.

Eric Volkman has no position in any stocks mentioned. Nor does The Motley Fool. Try any of our Foolish newsletter services free for 30 days. We Fools may not all hold the same opinions, but we all believe that considering a diverse range of insights makes us better investors. The Motley Fool has a disclosure policy.