David Einhorn of Greenlight Capital is a big fan of Consol Energy. Should the average investor be a fan, too?

In mid-November, hedge fund manager David Einhorn pounded the table on beleaguered coal and gas producer CONSOL Energy (NYSE: CNX). Einhorn called CONSOL his best idea and gave a 79-page presentation on the stock when CONSOL traded for less than $8 per share.

Since Einhorn's statement, many things have changed and CONSOL Energy's stock price is now 30% higher. Let's analyze whether Einhorn's bullish thesis still holds true in light of the changed circumstances and whether the stock is a good buy for the individual investor.

Einhorn's bull case
In November, Einhorn's bullish thesis was that the market was valuing CONSOL too cheaply. To Einhorn, CONSOL has many strengths. The company has an excellent management team that foresaw coal's decline and pivoted to natural gas when coal prices were still strong. Because they sold at the right time, CONSOL management sold the company's higher-cost coal mines for a substantial sum, used the money raised to buy what turned out to be valuable natural gas assets, and kept the company's lower-cost coal assets. 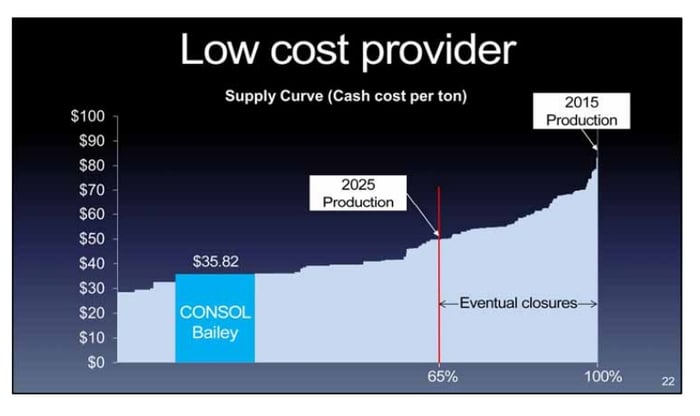 Because they kept the long-life, low-maintenance capex, lower-cost coal assets, CONSOL has a competitive cost of production despite the havoc that low natural gas prices have wrought on coal. As the chart shows, CONSOL has one of the lowest coal production costs in the industry. The low costs have kept CONSOL's coal operations in operating cash flow-positive territory. CONSOL's fourth-quarter total coal division cash costs amounted to $34 per ton, well below the company's average sale price of around $48-$52 per ton. Because it bought natural gas assets in the promising Marcellus and Utica shale plays, CONSOL's natural gas operations are also low cost and have substantial growth potential. 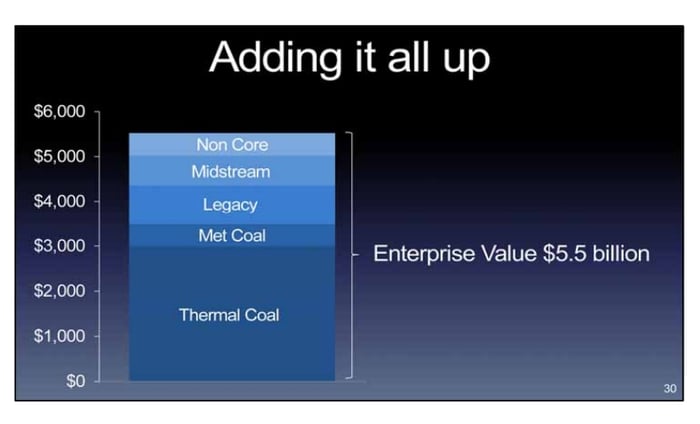 After putting in relatively conservative assumptions in his DCF, Einhorn calculated that CONSOL's coal operations were worth $5.5 billion, and CONSOL's natural gas assets were worth upwards of $6.6 billion or higher. Given CONSOL's enterprise value of $5.5 billion at the time, CONSOL looked like a steal.

The things that have changed
Since November, many things have changed. CONSOL Energy cut its 2016 capital expenditure budget to a range of $205 million to $235 million from the previous $400 million to $500 million, suspended its dividend, and sold part of its coal operations. Natural gas has fallen below $2 per Mcf from $2.5, and former coal leader Peabody Energy has strayed closer to a potential bankruptcy.

How the changes affect the Einhorn's case
Arguably each of the changes is neutral to positive for CONSOL Energy.

By cutting its capital expenditures, CONSOL Energy will better balance its cash flow while preserving its liquidity. Given that CONSOL Energy reported a negative free cash flow of $43 million for its fourth quarter, the company's lower capex spending of around $50 million a quarter will put the company much closer to its goal of being cash flow-neutral. Although the lower capital expenditures will translate to slower production growth, increased natural gas and coal production isn't really a good idea at a time when both markets are oversupplied.

Similarly, CONSOL Energy's suspending its dividend of $0.01 per share will help the company with its cash flow. The dividend suspension will give the company an extra $2.3 million per quarter to service its debt.

CONSOL's selling its Buchanan coal operation and certain other metallurgical coal reserves for $420 million is also good news. Although Einhorn stated in his presentation that he expected upwards of $500 million for the coal operation divestment, CONSOL is nevertheless getting something within the ballpark of Einhorn's estimates, which means that Einhorn's DCF calculations for the company's other assets aren't too far off base. By selling, CONSOL can use the money to pay down its long-term debt of $2.75 billion and deleverage.

While the lower natural gas prices aren't positive, they aren't unexpected. Natural gas prices are typically lower in the spring than in the winter because of lower seasonal demand.Although the potential bankruptcy of Peabody Energy will hurt sentiment, the bankruptcy won't disrupt CONSOL Energy's remaining coal operations and could help supply and demand if some of Peabody's production goes offline.

David Einhorn's bull case holds
Given that each of the changes is neutral to positive, Einhorn's bullish thesis on CONSOL Energy holds. Because it has over $1.2 billion of liquidity after its Buchanan coal sale and is closer to cash flow breakeven given its cost-cutting plans, CONSOL Energy is not in danger of suffering the same fate that Peabody seems it will undergo. If natural gas prices rise because the current oversupply in the industry alleviates, it will have as much upside as Einhorn estimated. Given CONSOL's net debt of around $3.6 billion at the end of 2015 and the company's 240 million shares outstanding, Einhorn's estimated $12.1 billion in enterprise value would give the company a price target of $35 per share. If CONSOL reaches just half of Einhorn's target, the stock would still deliver an over 50% return from current levels. CONSOL shares offer good risk reward and seem like a good buy.