On paper, General Motors' Chevy Bolt is the most obvious rival to Tesla's Model 3. But the new baby Tesla should have three other automakers very, very worried. Here's why.

Tesla's upcoming new Model 3 sedan is aimed right at the German luxury giants -- and that should have the Germans worried. Image source: Tesla Motors

There has been a lot of talk in the media about how Tesla Motors' (TSLA -6.42%) Model 3 compares with General Motors' (GM -1.99%) Chevrolet Bolt. Bloomberg even went so far as to say that GM is now Tesla's "electric enemy," because the Bolt and the Model 3 are so similar on paper.

I get why people are making that comparison. Right now at least, the Bolt and the Model 3 are the only two all-electric cars with over 200 miles of range and mass-market prices that are known to be headed for production.

But I think that comparison is misplaced. While it's a safe bet that some folks will choose between the two, it's not quite fair to either Tesla or GM to compare the Model 3 directly to the Bolt. Setting aside the similar powertrain specifications and starting prices, they're very different vehicles: One's a sleek and sporty luxury sedan, the other is an upright crossover SUV designed for urban environments and ride-sharing.

That said, there are three other automakers that should be very worried about the Model 3, because each of those 276,000-and-counting Model 3 reservations represents a sale that they could have won. Here's why.

With just over 50,000 vehicles delivered in 2015, Tesla is still a long way from "disrupting" the global auto giants, all of which posted sales in the millions. But as the company gleefully pointed out in its fourth-quarter shareholder letter, U.S. sales of its Model S sedan trounced those of directly comparable sedans from the German brands that have long dominated the global luxury-car conversation. 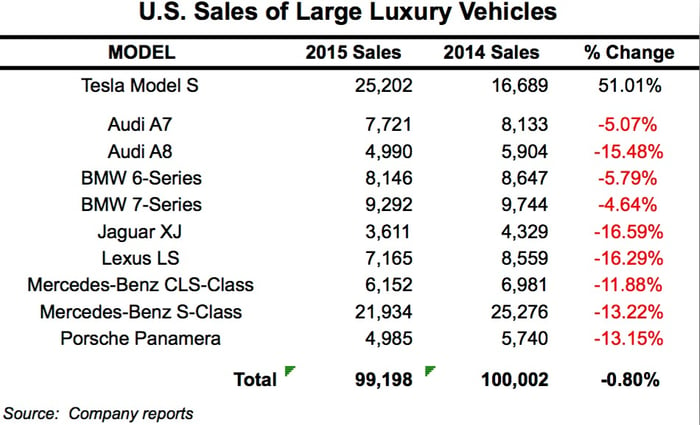 Each of those brands did just fine in 2015, of course, thanks in part to other vehicles in their portfolios (particularly luxury SUVs). But for BMW, Audi, and Mercedes-Benz, sedans are their core products -- and compact sedans have long been their high-volume mainstays.

So here's the question: Given the huge number of Model 3 reservations, how will the new baby Tesla compare with BMW's vaunted 3 Series and its German rivals?

How the Model 3 will impact the compact luxury sedan segment
Tesla CEO Elon Musk said on Sunday that the company had received 276,000 "reservations" for the Model 3 sedan it unveiled late last week.

Assuming that Tesla's ramp-up to production goes roughly as it hopes, how will those reservations translate into U.S. sales in 2018, when Model 3 deliveries are likely to begin in earnest? Let's start by making three assumptions:

Those three assumptions give us a total of 103,500 Model 3s delivered to U.S. customers in 2018. How does that compare to the Germans?

If 2015 U.S. sales are any indication, it compares very well indeed.

As you can see, our projected number for 2018 would have put Tesla's Model 3 in second place in the segment in 2015, trailing only the combined total of BMW's four-door 3 Series and two-door 4 Series. And of course, that doesn't really express its true likely impact, as it will almost certainly steal at least some sales from the Germans.

But even if the new Tesla doesn't steal many sales from the Germans, it represents a lost opportunity to capture over 100,000 U.S. buyers that were willing to step up for a great electric luxury sedan.

Either way, executives at those three brands have a lot to think about.

The Germans will likely respond with electric cars of their own
I do think that the Model 3 will steal sales from more than just the German luxury brands. If the Model 3 didn't exist, some of the 276,000 reservation holders might well buy a 3 Series or C-Class. But I think plenty would have bought other "green" cars, a Toyota Prius, a Nissan Leaf, or a Chevrolet Volt -- or yes, a Bolt.

But as with the Model S (and almost certainly the new Model X SUV), Tesla will rightly be able to say that it trounced the German luxury brands if things play out as we've assumed. That has to hurt in Munich, Stuttgart, and Ingolstadt -- and rumors suggest that all three brands are already working hard on new electric vehicles in hopes of matching or beating Tesla at its own game, just as Elon Musk has long hoped.