Total sales rose less than 1%, but don't let the numbers fool you: GM had a very good March.

General Motors (GM 2.19%) delivered slightly more vehicles in the U.S. during March than it did a year earlier. Based on the stock's performance since Friday, investors weren't impressed by its 0.9% sales gain. 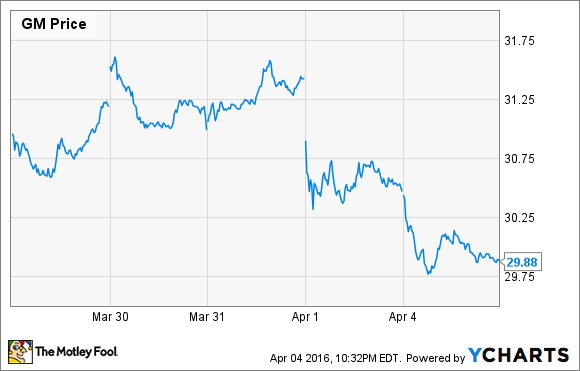 GM's sales result doesn't look very good compared to the 8% gain logged at crosstown rival Ford Motor (F 2.33%). Considering that there were an extra two selling days in the month this year, the modest increase appears even more disappointing.

However, much of the sales shortfall relates to GM's efforts to drive its profit margin higher. That could lead to a very nice earnings report later this month.

Rental sales fall again
The single biggest reason why U.S. delivery totals have stagnated at GM this year is its decision to reduce sales to rental car companies. Traditionally, GM has sold a lot of cars to the daily rental industry, but these sales tend to carry low profit margins. Furthermore, used rental cars usually hit the auction block within a year, hurting resale values -- which can drive up lease rates and cut into automakers' pricing power.

In March, GM reduced daily rental sales by roughly 14,000 units (33%) compared to the prior-year period. This affected its sales growth by about 5.6 percentage points on a year-over-year basis.

Ford has been at the other end of the spectrum for the past few months, with big increases in daily rental sales. Daily rental sales increased to 17% of Ford's deliveries in March, compared to 12% a year earlier. Looking just at retail sales, GM actually posted bigger gains than Ford.

GM keeps discounts in line
Even as auto sales have remained near last year's record pace, some industry observers have warned that discounts are on the rise. However, this doesn't seem to be a problem at General Motors.

GM's average transaction price (ATP) rose more than $1,500 relative to February and is $5,000 above the industry average due to the company's strong position in the lucrative truck and SUV markets. Furthermore, incentive spending was just 10% of ATPs in March, below the industry average of 10.9%.

By contrast, GM's incentive spending had crept up to 12.4% of ATPs in February as dealers tried to clear out older cars, although ATPs were still strong. It was good to see GM post solid retail sales growth in March despite reining in incentive spending. This speaks to the strength of demand for GM's trucks, SUVs and crossovers, as well as recently redesigned cars like the Chevy Malibu and Chevy Camaro.

Positives outweigh negatives
In one of the few negatives for GM last month, Ford delivered more full-size pickups than the General. Ford deserves a lot of credit for selling 73,884 F-Series trucks in March -- apparently without particularly large discounts. On the other hand, GM did manage to sell 69,514 full-size pickups during the month, which isn't too shabby.

Furthermore, General Motors' move back into the mid-size truck market continued to pay big dividends last month. The Chevy Colorado and GMC Canyon have combined for about 9,000-10,000 sales per month since early 2015, but dealers moved 12,585 during March. (Ford doesn't sell a mid-size truck in the U.S. right now, although it is expected to revive the Ford Ranger in a few years.)

In short, aside from the headline sales number, it's hard to find much to criticize in GM's March sales report. The company appears to be cutting back on low-margin business: both discount-fueled retail sales and daily rental sales. The fact that it can do so while keeping total sales roughly flat is fairly impressive.

Of course, we'll have to wait for General Motors' Q1 earnings report to confirm that the company's strategic actions are boosting its already stellar profit margin in North America. But GM's recent results clearly point to further margin expansion in its most lucrative market.