Formerly a division of General Electric known as GE Capital, Synchrony Financial (SYF -0.31%) is possibly the largest credit card issuer that you've never heard of. If you have credit accounts with a few retailers, there is a good chance you're already a Synchrony customer. Here's an overview of Synchrony, and some basic information about how the company is doing.

A long list of partners and products
Synchrony issues retail credit cards for far too many companies to list here. Just to mention a few of the best-known Synchrony partners:

Synchrony has more than 68 million customer accounts, and financed $114 billion in sales in 2015. The company is also the issuer of the CareCredit healthcare credit card that has flexible financing options, including no-interest financing for periods of six to 24 months. CareCredit can be used for dentistry, LASIK surgery, vision care, hearing aids, pet care, and many other healthcare costs that aren't covered by your insurance.

Finally, Synchrony runs an Internet-based bank (with one physical branch) that offers savings accounts, CDs, and money market accounts. Like many other online banks, Synchrony is able to offer significantly better interest rates on savings products than most brick-and-mortar banks. For example, Synchrony currently offers a rate of 1.25% on a 12-month CD -- five times the national average.

A strong 2015 that beat the company's own estimates
Synchrony has produced some impressive growth numbers in its short history as an independent company. In its most recent quarterly report, the company's number of active accounts rose 5% year over year, purchase volume grew by 8%, and loan receivables (outstanding balances) increased by 11% -- handily surpassing Synchrony's own expectations of 6%-8% growth.

In addition, Synchrony renewed some of its most important partnerships and added a few new ones (Newegg and Stash Hotel Rewards) during the fourth quarter. The company also launched mobile applications for its Car Care One and CareCredit products. This allows Synchrony to build on its already-impressive 43% market share in private-label merchant credit cards, and should put the company in a good position to keep growing. In fact, Synchrony projects that loan receivables will grow by another 7%-9% in 2016.

Finally, Synchrony's 2015 efficiency ratio of 33.5% is extremely strong when compared with the rest of the financial sector, which typically runs in the 50%-60% range (lower is better). For comparison, fellow credit card company American Express ran a 58% efficiency ratio last year, and major credit card issuer JPMorgan Chase's ratio was 63%.

Risk factors
However, Synchrony isn't without significant risks investors need to be aware of. Most significantly, the company has a significant amount of subprime customers, which is why its net charge-off rate of 4.32% is well above the industry average of 2.9%.

Even so, this creates a major risk factor in the event that a bad recession hits. In terms of priority, paying credit cards is usually lower than a mortgage, auto loan, or basic living expenses, so credit card default rates tend to skyrocket during bad economic times. Synchrony already has high delinquency, so this could be a big threat to the company's profitability if things turn sour.

A good buy?
Although I consider Synchrony's business to be significantly riskier than that of American Express and most other card issuers, the stock's valuation makes up for it. 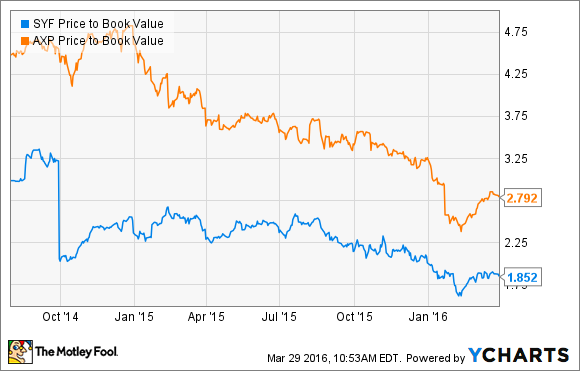 In addition, thanks to general weakness in the financial sector, Synchrony is trading close to its lowest valuation as a public company. The bottom line is if the economy continues to improve and Synchrony can continue to grow, this stock could deliver strong performance in the years ahead.