Windows Defender Advanced Threat Protection is a new service that businesses may find quite valuable. But if they want it, they'll need to upgrade to Windows 10.

The Redmond tech giant has been involved in the creation of antivirus software for more than a decade, but in recent quarters it has begun to step up its commitment. The company's latest product provides a cloud-based security service aimed at enterprise customers. There's no telling how big the business could be for Microsoft, but it serves to underscore two of the company's major initiatives.

More services, more subscriptions
Microsoft announced Windows Defender Advanced Threat Protection early last month. It's a new product aimed at Microsoft's enterprise customers that leverages Microsoft's cloud computing technology to help detect, investigate, and respond to advanced cybersecurity threats. It's built directly into its Windows 10 operating system, but also utilizes a network of servers and a team of cybersecurity experts -- it's a service, not a simple piece of software. Microsoft has yet to disclose any pricing details, but it could be sold to businesses in the form of a subscription. 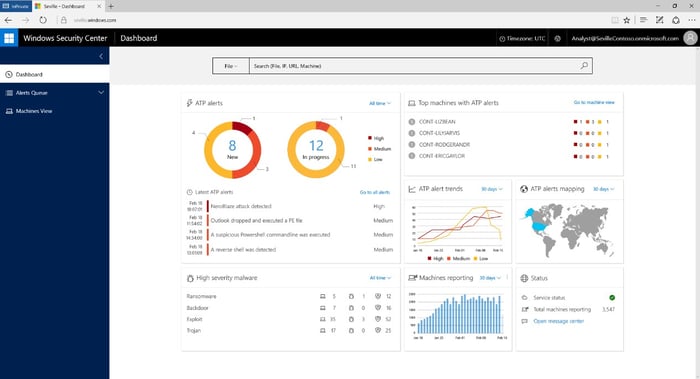 Microsoft has shifted its focus toward subscriptions in recent years, and its growing slate of enterprise offerings plays an increasingly important role in its financial success. In particular, Microsoft's management has placed heavy emphasis on its commercial cloud annualized revenue run rate, a hypothetical figure that quantifies potential annual commercial cloud revenue if all current subscriptions were maintained for a full year.

Last quarter, it exceeded $9.4 billion as businesses purchased a growing-number of Office 365 and Dynamics CRM subscriptions, along with an increasing amount of cloud-computing resources. Microsoft's management, however, is not satisfied, and wants the figure to hit $20 billion by its 2018 fiscal year.

Windows Defender Advanced Threat Protection wouldn't be the first time Microsoft leaned on cybersecurity to drive additional cloud revenue. Last year, it announced E5, a premium version of Office 365 that augmented its productivity software suite with advanced security features. Microsoft charges businesses about $8.25 per person to use the basic Office 365 service. E5 costs $35 -- more than four times as much.

Aiming for a billion
But perhaps even more important is what Windows Defender Advanced Threat Protection could do to drive additional Windows 10 adoption. In a blog post announcing the product, Windows head Terry Myerson noted the growing number of enterprise users upgrading to Windows 10. "From the Department of Defense...to NASCAR to Virgin Atlantic to schools all over the world -- we're excited to see customers with the most demanding requirements move to Windows 10 faster than ever before," he wrote.

Enterprise customers often take many years to move from one version of Windows to the next. Most consumers can handle the switch, experiencing few, if any, inconveniences, but for organizations with large IT departments and hundreds of thousands of machines, it's often a complex and costly process. By adding advanced threat protection, Microsoft is making the prospect of upgrading much more enticing. Windows Defender Advanced Threat Protection is exclusive to Windows 10; enterprise users with older versions of Windows can't access it.

"We encourage our customers to upgrade to Windows 10 for our most advanced security protection, with the opportunity to take advantage of Windows Defender Advanced Threat Protection," Terry added.

Microsoft wants Windows 10 installed on at least 1 billion devices within the next two years. Eight months in, it's running on more than 270 million machines -- a nice start to be sure, but Microsoft still has quite a ways to go. On the company's earnings call in January, management detailed how it would target enterprise customers for Windows 10 adoption in the second half of 2016.

For some businesses, Windows Defender Advanced Threat Protection may be the push they need to upgrade to Windows 10.