There's still plenty that most of us don't know about Google's Internet service.

Alphabet's (GOOG 1.36%) (GOOGL 1.29%) Google launched its Fiber Internet service about four years now, but because it's only available in a few select regions across the U.S., some of the details of the service still elude many people. 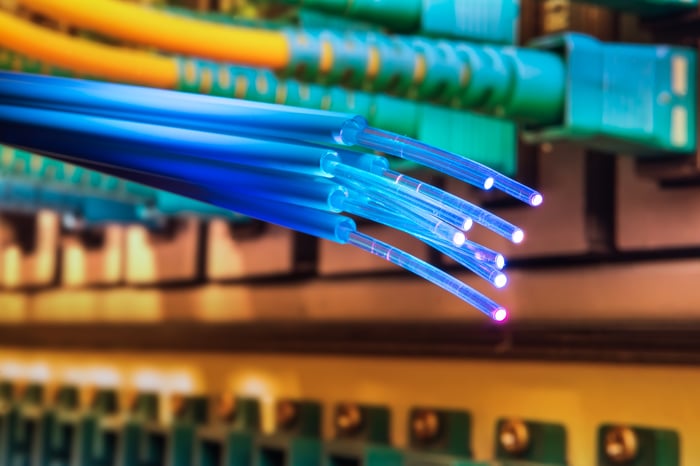 2. It's helping to lower your Internet bill, or increase your speeds
When Google Fiber shows up in a city, Internet service providers (ISPs) either increase their Internet speeds, lower their prices, or both. For example, when Google announced Fiber was coming to Charlotte, North Carolina, Time Warner Cable increased its Internet speeds across the board, by up to 6 times faster than before.

3. Fiber's not the fastest Internet around
Comcast recently launched a 2 Gbps service on its existing cable lines. The new service isn't available in many locations, but it's opening up a new way for the company to make more money from its existing lines. The price tag is significantly more than Google Fiber, though, at $300 per month.

4. You can get home phone service
That's right, you can still get a home phone that you can actually hang on the wall! Fiber just launched its home phone service with nationwide local and long distance calling for just $10 per month (on top of the Fiber Internet price). Users can also make international calls with rates as low as $0.01 per minute. Fiber phones also have free call forwarding to smartphones, Caller ID, 911 service, and let you keep your existing number.

5. The service is continually expanding
Google Fiber is now available in four cities, with seven more cities set to come online, and 11 more in the works. That's not many locations compared to the entire U.S., but remember that Google Fiber only launched four years ago.

6. You can get 1 TB of Google Drive storage with your service
Google's known for offering lots of free online services, but even Google starts charging for online storage space after awhile. Fortunately for Fiber customers, the company offers 1 TB of free Google Drive storage, compared to 15 GB of free storage for everyone else.

7. There are no data caps on your Internet usage
Surprisingly, this is no longer a given for some Internet service providers. Comcast is testing a 300 GB per month data cap in some places around the country, and if customers want unlimited data they have to pony up up to $35 more per month for it. Similarly, AT&T's Gigapower offers up to 1 TB of data usage each month, and charges $10 per month for each 50 GB over that.  Admittedly, that's a lot of data, but it's still the fact that AT&T and Comcast have some version of a data caps for home Internet, while Fiber doesn't restrict any amount of data usage.

Google Fiber beats the competition in most categories, but the real focus for the company is to force its competitors to offer faster Internet service at lower prices. And so far, it appears that's happening.

By doing so, Google believes more people will use its online services, spend more time online, and eventually see more of its ads. And as AT&T, Comcast, and Time Warner Cable try to match or exceed Fiber's offerings, they're effectively helping Google reach its goal.