Please ensure Javascript is enabled for purposes of website accessibility
Log In Help Join The Motley Fool
Free Article Join Over 1 Million Premium Members And Get More In-Depth Stock Guidance and Research
By Cory Renauer - Apr 6, 2016 at 10:24AM

It's 100 million. Find out why this figure means everything.

I have a confession: I'm a compulsive reader of financial statements and do this sort of thing for fun. My passion doesn't get me invited to many parties, but it does give me a chance to offer helpful advice to the uninitiated.

I thought the treasure trove of curious disclosures in the SEC filings from Anavex Life Sciences (AVXL 10.84%) provided a perfect opportunity to shed light on some important lessons. While there are so many figures to choose from to highlight, the 100 million authorized shares of capital stock is one you absolutely must understand if you're considering investing in this pioneer of an alternative Alzheimer's hypothesis.

Slimming your slice of any potential pie
When the company reported fiscal first-quarter earnings, the number of shares outstanding at the end of 2015 was 34.65 million. In a nutshell, the 100 million authorized shares means Anavex can issue another 65.35 million shares at will, without consulting shareholders or the board of directors.

For the sake of argument, suppose Anavex earns a net profit of $100 million a few years from now. Earnings-per-share would come out to $2.88, but if it issues those shares -- and it probably will -- EPS would fall to just $1. That's a big difference in your potential share of any future earnings.

It's not at all uncommon for clinical-stage biotechs to authorize far more shares than the number issued. The ability to raise equity and keep operations running as quickly as possible is the entire point of becoming a publicly traded company. In fact, Anavex's authorized-to-issued ratio is relatively modest compared to the likes of Kite Pharma (NASDAQ: KITE) or bluebird bio (BLUE 5.93%).

Going (at a snail's pace) concern
However, when it comes to Anavex, "running" isn't the word I would use to describe the pace of its operations. I'll bet my hat -- as a bald person in a cold place I really need a good hat -- the company will authorize a lot more after the current 100 million have been issued. This means that if there ever is a profit, shareholders buying in now will see very little of it.

Since going public in 2007, its greatest clinical accomplishment has been the completion of "Part A" of a two-part phase 2a trial with its lead Alzheimer's candidate Anavex 2-73 that began in 2014.

To be fair, Anavex traded over the counter until uplisting to the Nasdaq exchange last October, but it's been burning through millions each year just the same.

In other words, after more than eight years as a publicly traded company, Anavex is halfway through a 32-patient dose determination trial. The study lacks a control arm, so it won't tell us anything useful, from a regulatory standpoint, about 2-73's efficacy.

The company ended 2012 with an accumulated deficit of about $38 million, which by the end of last year had grown to a little over $67 million. That's an awful lot for a company that sponsored one clinical trial. 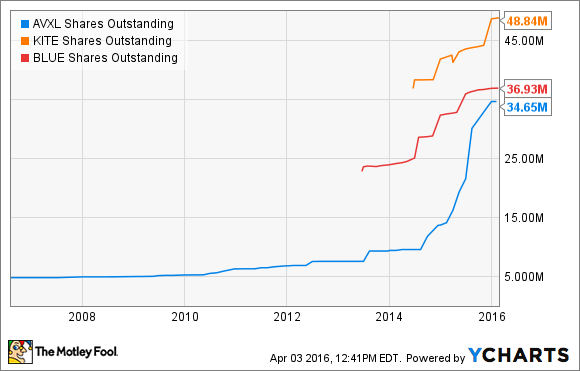 By comparison, bluebird bio ended 2015 with an accumulated deficit of $314.2 million. It is, however, sponsoring eight clinical trials with multiple candidates, and it received $75 million upfront from Celgene upon entering a collaboration with the oncology heavyweight months ahead of its IPO.

As a publicly traded company, Kite Pharma is a relative infant that ended 2015 with an accumulated deficit of $159.7 million. It has multiple clinical-stage candidates in trials sponsored by Amgen and the National Cancer Institute. It's also sponsoring four pivotal studies of its lead candidate with plans to submit an application to the FDA by the end of the year.

More dilution ahead
Let's assume Anavex is serious about developing 2-73, or any Alzheimer's candidate, through phase 3 and into the commercial arena. The 65.35 million authorized, but not yet issued, shares aren't going to get it there unless those 32 patients come out of "Part 2" of the 2-73 trial acting like Bradley Cooper in Limitless.

At the end of the 52-week follow-on study with capsules, Anavex will test the patients for cognitive impairment. Without a control group for comparison, they'll probably be positive, but the FDA won't be interested in any data from that trial except the drug's safety profile.

The subsequent press release might result in a temporary price spike. Even reports of encouraging preclinical results have sent Anavex shares soaring. The company might be able to raise a decent amount of equity in the process, but hardly enough to commercialize 2-73 without a big partner. So far, no drugmakers with enough resources seem interested.

An indication as widespread as Alzheimer's will require a randomized, placebo-controlled study with over 1,000 patients to support an application. Given the inefficiency Anavex has displayed throughout the past eight years, I'm afraid long-term minded shareholders will see their share of any potential profits continue to dwindle well past the 100 million shares authorized, to practically nothing.