These three graphics help to explain the current situation at the LNG exporter, and what direction it could take in the future.

The story behind Cheniere Energy (LNG -1.05%) makes for a pretty good read. In less than 20 years, the company has completely transformed its business model twice, and its current iteration as an liquefied natural gas exporter from the U.S. seemed like an absolute long shot only a few years ago. Now, it has loaded its first LNG cargoes and is on pace to become a major global supplier of the fuel by the end of the decade. To help investors wrap their heads around all this, let's take a look at three charts that help explain where Cheniere Energy can go from here.

LNG is going to be big in the coming decades
As investors in the U.S., we have a tendency to want to translate our experiences here onto the global stage in ways that may or may not apply. A great example of this can be seen in energy trends. In this country, overall consumption of fossil fuels is flat to declining, and domestic natural gas is cheap and plentiful. These conditions are far from the case globally; nations that aren't as well endowed with natural resources will have vast and growing appetites for natural gas in the coming years.

The constraints involved with moving natural gas overseas means that there is an immense opportunity for those with excess LNG production capacity to export to both Europe and Asia. 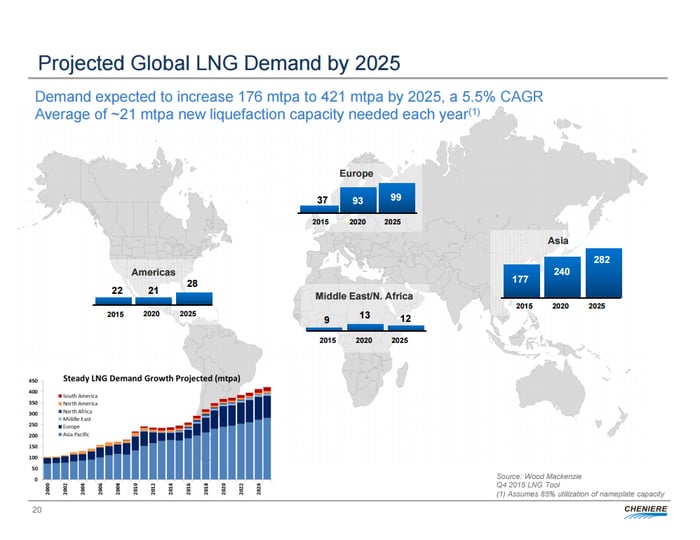 This appetite for LNG explains how Cheniere has about 87% of its total production capacity already locked into supply contracts. More than 80% of that is in 20-year contracts, providing the company with a stable revenue and cash flow stream that should give it ample opportunities to expand its LNG export capacities over the next decade.

We're very well suited to serve that market
LNG exports have been a hot topic around the globe. For about a decade, integrated oil and gas companies have been making huge bets on LNG exports, building facilities in places like Australia, Africa, and the Middle East. However, many of the investment decisions for these facilities were made before the industry really cracked the code on shale drilling in the U.S. Now that it has done so and have natural gas prices in the $2 to $3 per thousand cubic feet range, the U.S. has become one of the cheaper sources for LNG. 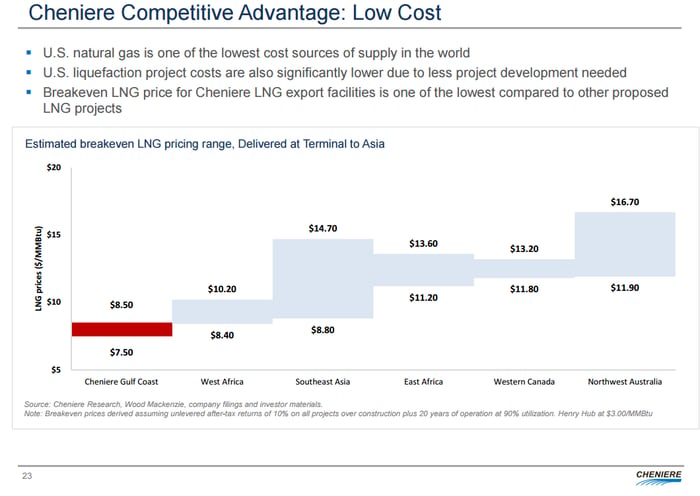 There are a couple of inherent advantages that U.S.-based LNG facilities have that Cheniere can tap. First, the U.S. already has an extremely robust energy infrastructure that can deliver immense quantities of gas to the Gulf Coast. Second, there are lots of independent producers all selling the same commodity, so Cheniere can shop around for the cheapest gas possible and not get locked into unfavorable contracts. And third, the existing infrastructure in the Gulf Coast region also means construction costs are lower than in more remote locations like Western Canada and Northwest Australia.

When the next wave of LNG facilities is needed to meet increasing demand, the Gulf Coast will likely be a top candidate, giving Cheniere a leg up over producers in other parts of the world. Under the leadership of former CEO Charif Souki, it seemed that debt wasn't too big a deal and the company could start investing in greater expansion. However, after the ouster of Souki by activist investor Carl Icahn, new management has hit the pause button on expansion until the company starts to generate some operational cash flow. Once that happens and it starts to manage its debt load, it won't be surprising to see Cheniere pounce on opportunities to gain greater market share in the LNG export business.

What a Fool Believes
Cheniere Energy is one of the more unusual investing opportunities in the energy space. It's an investment in the natural gas boom in the U.S. and the cost advantage that this country has compared to other natural gas producers worldwide. At the same time, the structure of its LNG supply contracts also means that Cheniere's not as subject to commodity price fluctuations as other natural gas investments are.

For the patient investor who is considering LNG as an opportunity, the charts above pretty much spell out how Cheniere will be able to profit in the business. There will be an opportunity over the next decade to supply the growing need for LNG, and a U.S. Gulf Coast-based supplier like Cheniere has a lot of advantages in capturing a piece of that market. But it will likely need to prove it is a reliable operator of LNG facilities and start to clean up its debt situation before it can take on any major new projects.