The cloud software company continues to grow at a torrid pace, pleasing investors despite substantial losses.

What: Shares of enterprise cloud software provider Workday (WDAY 3.62%) surged 27.1% in March, according to data provided by S&P Global Market Intelligence. The stock's gains were driven by a strong earnings report, with the company beating analyst estimates across the board. 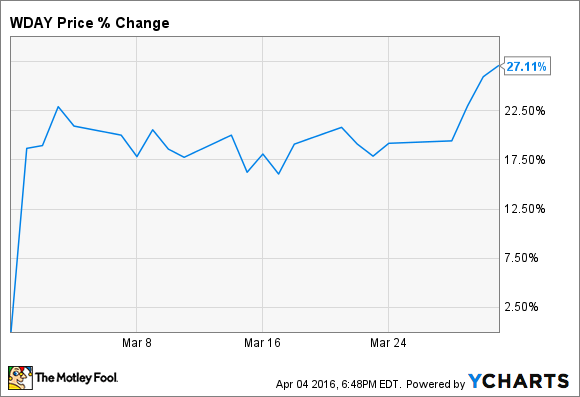 So what: Workday reported quarterly revenue of $323.4 million, up 43% year over year and about $4 million higher than the average analyst estimate. Subscription revenue rose 44% to $261.8 million, while professional services revenue rose 39% to $61.6 million.

Now what: Workday continues to grow revenue at an astounding rate, even as it passed the $1 billion mark in fiscal 2016. The company is still wildly unprofitable on a GAAP basis, but it is free cash flow positive thanks to deferred revenue growth and its heavy use of stock-based compensation. In fiscal 2016, the company generated $125 million in free cash flow, compared to a $290 million GAAP net loss and a $2.5 million non-GAAP net loss.

Going forward, Workday will need to keep up its impressive growth rate to keep investors on board. Down the line, the company will eventually need to show that it can generate real profits. For the moment, though, investors are happy to wait as Workday spends heavily on growth.

Salesforce vs. Workday: Which Is the Better Buy?