What: Shares of Celldex Therapeutics, (NASDAQ:CLDX), a biopharmaceutical company focused on the development cancer immunotherapies plummeted 49.6% in March, according to data from S&P Global Market Intelligence, after its lead candidate flopped in a pivotal phase 3 trial. 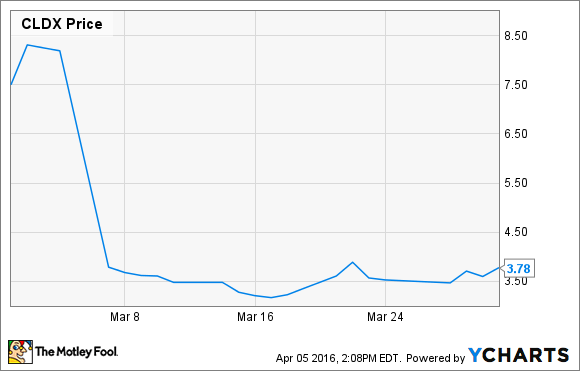 So what: Spring may have sprung for the rest of us, but the second planned interim analysis of glioblastoma candidate, Rintega, left Celldex shareholders in the cold.

Glioblastoma is one of the deadliest forms of cancer, with a 2-year survival rate below 25%. In trials such as these it's customary for independent data monitors to perform analyses after a predetermined number of "events" (in this case patient deaths). This way if there is a highly significant survival benefit, the trial can end early and patients in the placebo group can receive the experimental therapy.

At the first planned analysis for Rintega's ACT IV trial, last June, it had not reached significance, but data monitors allowed the trial to continue. At the second planned analysis, reported to Celldex on March 4, 2016, data monitors determined there there was no chance patients receiving Rintega would show a significant overall survival benefit.

Now what: This failure occurred at a particularly unfortunate time for Celldex. Success in earlier stage trials has bolstered the company's stock price over the past few years allowing it to fund a robust, and expensive, clinical stage pipeline. This was the company's first candidate to reach a pivotal phase 3 trial, and its failure will raise doubts about the rest of its pipeline.

Advancing five candidates into the clinic and sponsoring 11 new trials since 2013 is impressive but costly. Over the past three years, Celldex's extensive operations have burned through $326.8 million. With no products to sell, the $289.9 million in cash and equivalents it ended 2015 with give it a couple years at its current pace before it needs to impress the market again and raise some more equity.

The 700 patients in the ACT IV trial were screened for tumors expressing a high level of a specific protein. Also, to deceive the placebo patients, they were injected with a supposedly inert component of Rintega to cause injection site reactions similar to those receiving the experimental therapy.

While investigators mull over the bizarre results of the ACT IV trial, there is an upcoming catalyst that could boost Celldex shares in the near term. A 300 patient pivotal phase 2 trial comparing Glembatumumab Vedotin, formerly CDX-011, to standard chemotherapy in patients with advanced Triple-Negative Breast Cancer should produce topline data this November.

If the results are highly positive, Celldex stock could soar once again.