Please ensure Javascript is enabled for purposes of website accessibility
Log In Help Join The Motley Fool
Free Article Join Over 1 Million Premium Members And Get More In-Depth Stock Guidance and Research
By Jason Hall - Apr 6, 2016 at 9:07AM

The Teekay family of partnerships and companies had a bounce-back month in March. Here's why.

Energy shipping is in a weak cycle. Eventually it will recover and Teekay investors should do well. Image source: Teekay.

What: Shares of several stocks that are part of the Teekay Corporation (TK 6.60%) family, including Teekay, Teekay LNG Partners L.P. (TGP), and Teekay Offshore Partners L.P. (TOO), were up big in March: 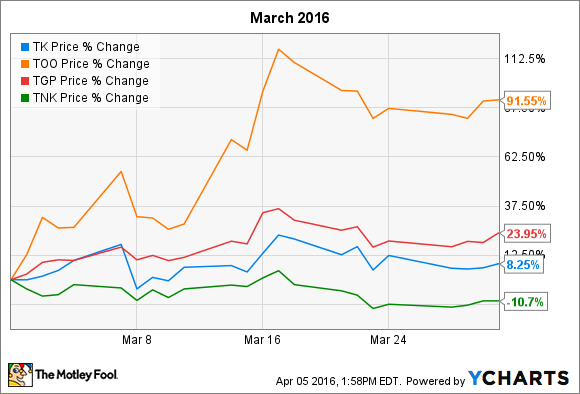 Teekay Tankers Ltd. (TNK 13.14%) was the only Teekay stock to finish March on a down note.

So what: The market's exuberance for Teekay, and particularly Teekay Offshore and Teekay LNG Partners, is more a reaction to "no more bad news" than it was anything "good" that's happened. Even after the strong market gains in March, shares of all of the Teekay family stocks are still well down for the year: 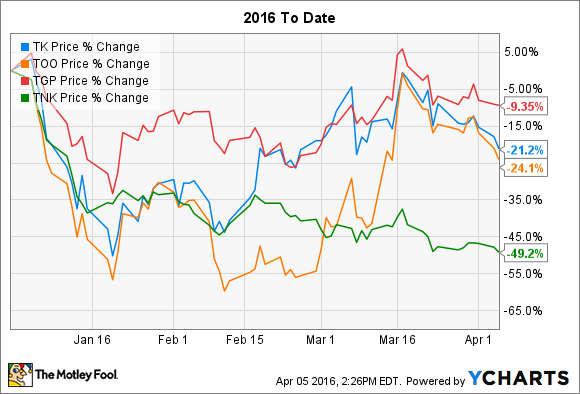 It's tied to several things. First, there's significant concern that the prospects for much of Teekay's business, which is heavily tied to shipping of energy products such as crude oil, propane, and liquefied natural gas, are facing strong headwinds. This is tied to weak demand for shipping of oil and refined products in the near future, as global demand continues to be relatively weak, and economic uncertainty, especially in parts of Asia including China, weighs on energy markets. There are also fears that the expectations for huge growth in LNG shipping could be overly optimistic.

The near-term weakness was a key reason that Teekay, Teekay LNG Partners, and Teekay Offshore all slashed their dividend and distribution payouts late last year, sending income investors fleeing the stocks to find higher-yield income. Another driver behind the payout cut was the (ongoing) weakness in the equity markets, which presented a challenge for Teekay LNG and Teekay Offshore, which have used equity offerings in the past to raise capital. The decline in the stock prices for these partnerships had pushed the yields up so high that equity offerings as a source of capital were simply no longer cost-effective.

While there's still some uncertainty about near-term demand, the dividend cuts from last year helped free up a lot of cash flows that Teekay can use to fund capital plans and support operations. At the same time, the Teekay family recently declared upcoming dividend payments, and held payouts steady at the levels announced in late 2015, so there don't appear to be any forthcoming cuts.

At the same time, it's likely that the Teekay family of stocks will remain very volatile, moving up and down with energy prices as much as "real" news.

As things stand today, Teekay Corporation stock yields about 2.8% based on the current dividend, while Teekay Offshore yields about 9% and Teekay LNG yields 4.7%. Looking ahead several years, it's likely that these prices turn out to be more than fair, and you could be collecting much larger payouts on your initial investment.

Nonetheless, there's also reason to expect the share prices to continue moving up and down, and you could certainly see them fall lower than current levels in the short term. There's also the potential that, if the biggest fears come true and demand for energy shipping further weakens, or if LNG growth doesn't pan out, dividend cuts could happen again.

But if you're willing to stomach the short-term volatility and the cyclical nature of shipping in general, a long-term investment in almost any of the Teekay family of stocks could turn out very well in a few years' time.