Please ensure Javascript is enabled for purposes of website accessibility
Log In Help Join The Motley Fool
Free Article Join Over 1 Million Premium Members And Get More In-Depth Stock Guidance and Research
By Selena Maranjian - Apr 7, 2016 at 9:59AM

One underappreciated aspect of military life is the ability to take advantage of special tax breaks for the military. These can be worth hundreds, if not thousands, of dollars. 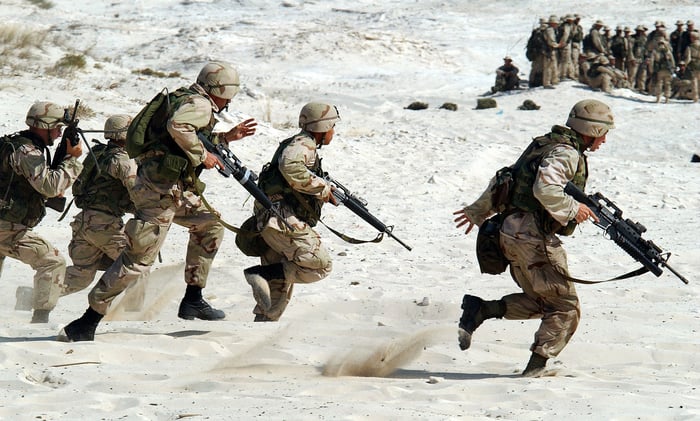 Being a member of the military offers delivers many benefits, such as the chance to live abroad for a while, free healthcare, job security, and college costs covered by the G. I. Bill, among other things. One underappreciated aspect of military life is that those in our armed forces can take advantage of special tax breaks for the military.

Here are some of the main special tax breaks military members should know about:

Extension of tax-filing deadline while in a combat zone
Most of us face an April 15 deadline each year for filing our return, paying our taxes, claiming a tax refund, or making IRA contributions. If you're serving in the military in a combat zone, though, you get an extension. It moves  your deadline to 180 days beyond the end of your combat-zone service.

Combat pay excluded from taxable income
If you receive military pay for time served in a combat zone, you may be able to exclude  that sum from your taxable income, potentially saving you a lot of money. This rule applies to enlisted people and warrant officers (including commissioned ones). You get to exclude all the pay for any month in which you served in a combat zone, even if you were only in the zone briefly and not for the entire month.

Withdrawals from retirement plans might be made without penalties
If you're serving in the military reserves, you may  be able to withdraw funds early from a retirement account (such as an IRA) without the penalty that others would face. To qualify, you must have been called to active duty for at least 179 days and you need to make the withdrawal while on active duty. (Note, though, that if it's not an emergency, you're probably best served by leaving that money in the tax-advantaged account to grow, so that it can serve you in retirement.)

IRS interest rates are capped  at 6%
If you owe the IRS money, it may somewhat patiently wait for you to pay it, but it will add interest to your balance due. In our current low-interest rate environment, that interest rate is  4% for underpayments and overpayments for the second quarter of 2016. But it won't always be so low, because it's calculated by taking the federal short-term interest rate and adding three percentage points. In 1982, the IRS was charging 20% interest. Fortunately, though, if it returns to high levels, those in the military who are having trouble paying what they owe due to their military service will see the rate they're charged on debt they owed before they entered military service capped at 6%.

More generous deductions
Most taxpayers have lots of tax deductions available to them, but some IRS deduction rules are more generous to those in the military. For example, if you're in the reserves and have to travel more than 100 miles from home due to your service, you can deduct unreimbursed travel expenses. While most folks deducting travel expenses include them among itemized deductions and need their itemized deductions to reach a certain threshold in order to be worth using, military folks get to have this tax break as an "above-the-line" deduction, also known as an adjustment to income, where it is used to reduce taxable income. Unreimbursed moving expenses can also be deducted, with military members on active duty not needing to meet any time and distance requirements, as others do.

Death benefits
Military folks will not want to reap these benefits because you have to die to receive them. Still, they're very useful when they apply. First, there's a $100,000 "gratuity" paid to survivors when someone dies on active duty or in certain reserve statuses -- or dies within 120 days of retiring with the death being service-related. It's a tax-free payment. Next, there's the forgiveness of any taxes you owe should you die while serving in a combat zone or in support of a combat operation. If that happens, taxes you owe in the tax year during which you died are forgiven (and repaid if they had been paid already). Taxes due for any previous tax years ending on or after the first day of active duty in a combat zone are also forgiven. There may be some additional tax forgiveness available, and the rules can get tricky related to joint tax returns, so consulting a tax pro is not a bad idea here.

There are more tax breaks for military members. You can gather more details on the breaks above and on other breaks in IRS Publication 3: Armed Forces' Tax Guide.