The 3D printing industry came back to life in March.

What: March was a solid month for 3D printing stocks across the board. Shares of ExOne (XONE) rose nearly 36% higher, while 3D Systems rose 37%, and Stratasys finished up 28%. 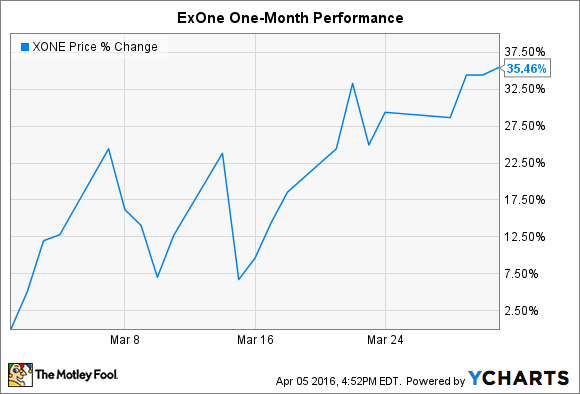 So what: Late March, ExOne released its fourth-quarter earnings that showed revenue increased 3% to $16.2 million, which translated to a net loss of $1.2 million, or $0.08 per share. Because the stock was little changed after the announcement, investors may have been largely expecting these results.

During the quarter, ExOne recognized revenue on the sale of 12 machines, accounting for 59% of its quarterly revenue. Its non-machine revenue, which management often highlights as a measure of acceptance for its binder jetting technology that can potentially translate into future machine sales, rose 19% year over year to a record $6.6 million. Thanks to higher 3D printer sales that offset fixed costs, ExOne's gross margin increased from 24.5% to 37.5% in the fourth quarter compared to a year ago.

ExOne also noted that it only burned through $1 million in cash since the third quarter, which was a major improvement from previous quarterly cash burn rates. Although ExOne ended the quarter with $19.3 million in cash, it's since raised an additional $13 million largely through a secondary offering from an entity controlled by ExOne CEO Kent Rockwell. In total, ExOne had about $32.3 million in cash the day earnings were released.

Now what: ExOne ended the year with a record order backlog of $16.5 million. This suggests that demand for its industrial 3D printers and services remains intact. Still, management is approaching 2016 with cautious optimism, citing "macroeconomic uncertainties, including the depressed energy sector and foreign currency devaluations," which may "influence the timing of capital equipment purchases and other spending decisions" from customers.

Ultimately, with a healthy backlog and cash position, ExOne appears to have a sizable buffer to navigate these potential challenges.