Please ensure Javascript is enabled for purposes of website accessibility
Log In Help Join The Motley Fool
Free Article Join Over 1 Million Premium Members And Get More In-Depth Stock Guidance and Research
By Brian Feroldi - Apr 7, 2016 at 10:21AM

Investors may have been reading too much into a couple of C-suiters' tax-season moves.

What: It was a rough month to be a shareholder of Ophthotech (ISEE -2.29%) as the clinical stage biopharmaceutical company focused on eye care shed 42% of its value during the month, according to data from S&P Global Market Intelligence. 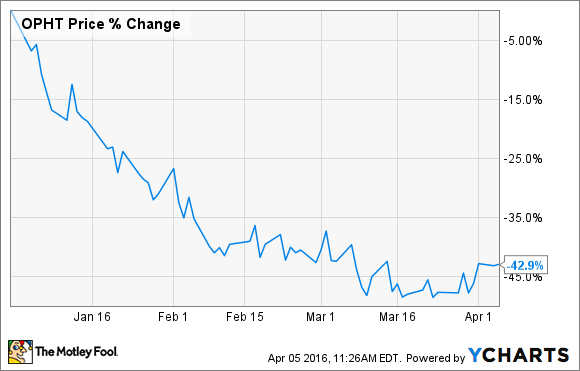 So what: There wasn't a lot of news during the month to explain the huge sell-off, so perhaps traders were simply reacting to the two slugs of insider selling that occurred during the period.

An SEC filing showed that on March 1, CEO David Guyer sold 22,060 shares worth just over $1 million. The sale reduced Guyer's holdings in his company to just over 54,000 shares, so it was a sizable portion of his position.

Another SEC filing reveled that Ophthotech President Samir Patel sold more than $800,000 worth of his shares at the end of the month. Patel still holds more than $10 million worth of the company's shares, so on a percentage basis this wasn't as big a deal, but it still represents a sizable amount of money.

News of the dual sales appears to have worried some traders, causing shares to fall hard during the month.

Now what: I can see how these stock sales might unnerve some investors, but it's important to remember that members of management teams may sell company stock for a variety of reasons, so you can't always read such moves as a signal to be bearish. This is especially true for sales that occur during tax season, as oftentimes insiders are forced to liquidate some of their stock so cover the hefty checks they're writing Uncle Sam to cover their tax liabilities from the previous year.

My advice? Instead of worrying about what insiders are doing with their shares, investors should stay focused on the long-term viability of the business and the prospects of the company's pipeline.

As a reminder, Ophthotech has already managed to nab pharma giant Novartis as its partner to help it commercialize Fovista -- its compound for treating the wet form of age-related macular degeneration, or wet AMD -- outside the U.S., a deal that has already netted the company $330 million in upfront and milestone payments. The deal could be worth a total of $1 billion plus a 30% royalty if everything goes according to plan.

Looking down the road, Ophthotech has a potentially big catalyst coming in the fourth quarter when it reports results from a Phase 3 study of Fovista in combination with Novartis' Lucentis. The odds of success look favorable, as in phase 2 trials, patients who received Fovista in combination with Lucentis were able to read 62% more letters on a standard eye chart than patients who used Lucentis alone. Given that the wet AMD market is currently valued at $7.1 billion, if Fovista can find its way to market then the company could quickly have a blockbuster on its hands and turn profitable.

In fact, an analyst at Leerink Partners recently forecast that by 2020, Ophthotech will earn $7.49 per share. If that prediction proves reasonably accurate, shares are an incredible bargain today.

Thus, if you were bullish on Ophthotech's prospects before the month began, I see no reason to change your view based on March's share price swing.