Please ensure Javascript is enabled for purposes of website accessibility
Log In Help Join The Motley Fool
Free Article Join Over 1 Million Premium Members And Get More In-Depth Stock Guidance and Research
By Jeremy Bowman - Apr 7, 2016 at 11:00AM

The organic grocer jumped as it agreed to sell itself to Apollo Global Management.

What: Shares of The Fresh Market (TFM) jumped 24% last month according to data from S&P Global Market Intelligence. The organic grocery chain spiked in a single day on March 14 after it accepted a buyout offer from Apollo Global Management for $1.36 billion. 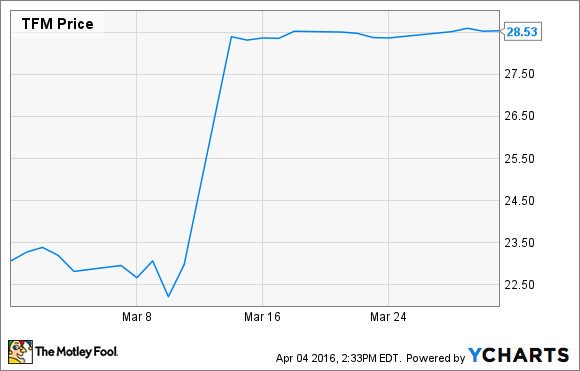 So what: Talk of The Fresh Market being acquired first circulated in February when reports revealed that Kroger Inc was competing to take over the struggling grocery chain. However, Apollo won the competition, offering a 24% premium over Fresh Market's prior-day closing price, buying it out for $28.50 a share.

The private-equity firm took over the company in an all-cash deal when Fresh Market began to look for suitors; sales growth had slowed, with comparable sales turning negative amid competition in the organic sector. Whole Foods Market has also faltered as mainstream grocers like Kroger have launched their own organic and natural product lines.

Now what: The agreement allowed Fresh Market to solicit better offers for 21 days following the deal -- however, that period ended Monday with no new proposals. Fresh Market stock has held steady since the deal was announced, indicating that shareholders expect to close at the agreed-upon price. I would expect Fresh Market stock to remain stable until the deal closes, which is expected to come in the second quarter.

Here's Why The Fresh Market, Inc. Gained 20% in February

What a Fresh Market Acquistion Would Mean for Kroger

3 Natural and Organic Foods Stocks That Cratered in 2015