2015 wasn't kind to companies in the natural and organic foods sector of the grocery industry. We take a look at three notable stock price meltdowns and look forward to the current year. 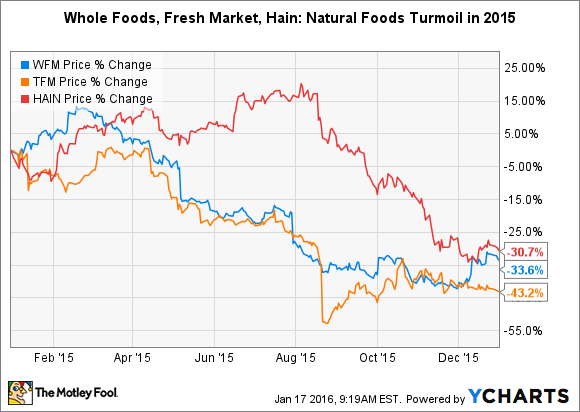 So what: 2015 marked the first year in which it became indisputably clear that natural and organic foods pioneer Whole Foods was finally beginning to lose revenue momentum courtesy of mammoth competitors such as The Kroger Co. (KR -0.34%), which has steadily increased its competitive offerings in this sector of the grocery industry. Ironically, as Whole Foods' comparable=store sales weakened during 2015, and turned flat during the company's final reported quarter of the calendar year, Kroger's "comps" remained robust, reaching 5.4% in its own final reported quarter.

While Kroger is a much larger and more diversified business than Whole Foods, investors nonetheless realized that some of its growth last year was built on gaining incremental amounts of Whole Foods' market share. Let's return to the preceding chart, with an overlay of Kroger's performance: 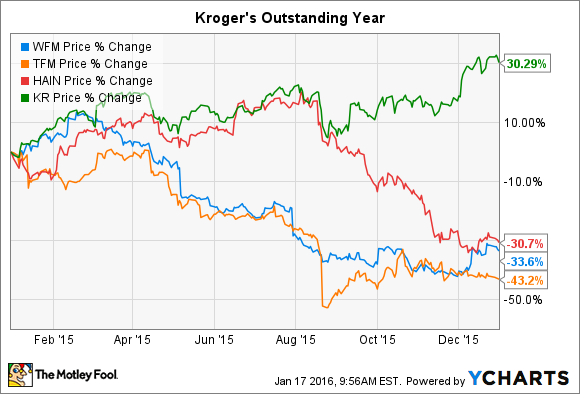 At $108 billion in annual revenue, Kroger is seven times the size of Whole Foods Market, a $15 billion business. But everything's relative: Intensifying competition between these two giants is impacting niche players such as The Fresh Market, which has grossed just under $2 billion during the past trailing 12 months.

Last year, The Fresh Market struggled to gain sales traction as it battled not only larger peers, but also smaller, conventional grocers in local markets. In the last reported quarter of 2015, the company's comps declined 3.7% -- a red flag for an organization, which, given its size, should be positioned for unit growth.

Considering the aforementioned dynamics, you might wonder why Hain Celestial Group didn't prosper last year, since it's primarily a supplier to natural and organic grocers. The company counts Whole Foods, The Fresh Market, and Kroger all as customers. Yet investors homed in on potential negative repercussions for Hain, such as the potential for price competition among retailers with massive purchasing power to drive the company's margins down, should retailers attempt to lean on their supply chains for an edge in the fight for market share.

Now what: The prescription for rebounding in 2016 is fairly straightforward for Whole Foods Market. As I've written recently, the company intends to promote the differentiated customer experience which brought it to prominence in the first place, while marketing what it believes to be core advantages over all competition: its high-margin prepared foods, its unmatched sourcing standards, and what is still an industry leading breadth of natural and organic products available in any given Whole Foods store.

Hain Celestial has promised to expand the number of channels in which its products are available, thus decreasing its reliance on natural foods retailers. Impressively, its business selling products directly via Amazon.com grew 39% last year. Company management has also signaled a willingness to grow the company through acquisitions, such as Hain's 2015 purchase of Canadian natural products manufacturer Belvedere International, which owns 200 brands, including the popular eco-friendly "Live Clean" line of personal care products.

For The Fresh Market, the path to redemption in 2016 is a little less clear. Newly appointed CEO Rick Anicetti, a veteran of the retail grocery industry, observed on his first quarterly conference call with analysts in November that The Fresh Market had, over the years, become too much of a margin-focused business, versus a customer-oriented business.

These four broad initiatives should help The Fresh Market regain its footing, given proper execution. But unlike Whole Foods, which already has clear points of differentiation to market and thus improve sales, and unlike Hain, which has a clear outlet to growth via acquisitions, The Fresh Market doesn't have a single "go-to" advantage in order to reverse its current fortunes. While The Fresh Market has lost the most of the three companies in terms of stock price, investors should wait for a clearer plan from the company's new CEO before diving in, enticing as these shares may appear.

John Mackey, co-CEO of Whole Foods Market, is a member of The Motley Fool's board of directors. Asit Sharma has no position in any stocks mentioned. The Motley Fool owns shares of and recommends Amazon.com, Hain Celestial, and Whole Foods Market. Try any of our Foolish newsletter services free for 30 days. We Fools may not all hold the same opinions, but we all believe that considering a diverse range of insights makes us better investors. The Motley Fool has a disclosure policy.