Please ensure Javascript is enabled for purposes of website accessibility
Log In Help Join The Motley Fool
Free Article Join Over 1 Million Premium Members And Get More In-Depth Stock Guidance and Research
By Jason Hall - Apr 8, 2016 at 7:52AM

Things are still on track to get worse before they get better offshore. Image source: Atwood Oceanics. 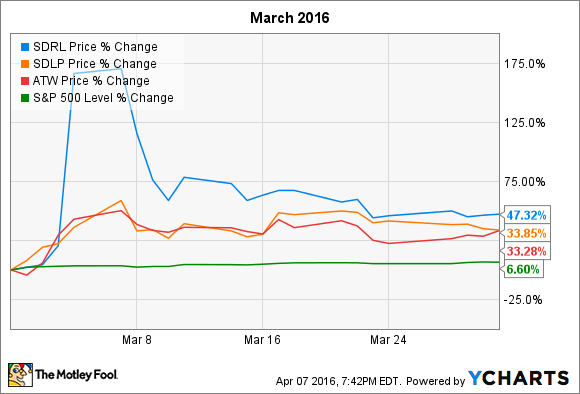 So what: March was a very good month for these companies' stocks, but there's not much indication that anything that happened in March really moved the needle for the offshore drilling industry's current situation. Here's a look at the notable occurrences: 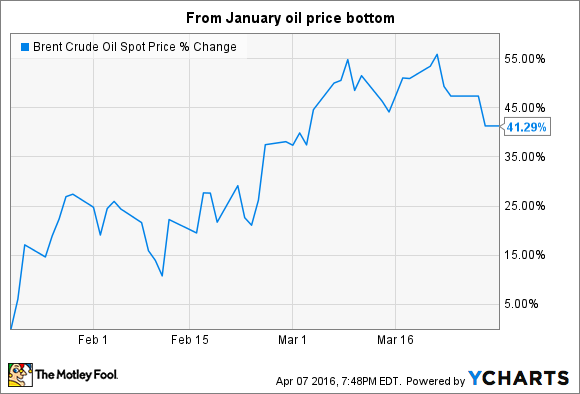 From the low point in late January -- when oil prices fell to 13-year lows -- through the end of March, Brent crude prices were up more than 40%, and got back above $40 per barrel for a time, though they've since fallen back slightly below that level. It is easy to forget that only a few months ago, there were some calls for oil to continue falling to as low as $15 per barrel, before the turnaround. In other words, it was nearly inevitable that the market would respond positively to rising oil prices. And that certainly happened in March.

Fredricksen's actions got the market excited
Seadrill's shares were also lifted by the actions of the company's founder and largest shareholder, John Fredricksen, who sold a $500 million stake in another unrelated business, freeing up a significant amount of cash that many people were speculating he would use to help support Seadrill. Fredricksen has yet to deploy any of that cash into the company, but there's little doubt -- considering that Seadrill is one of his biggest holdings -- that he would probably be willing to put capital forward to support it if needed.

Now what: The oil price bounce-back is a good thing for the energy industry, but it's far short of what the offshore market needs to support increased activity. Simply put, oil prices will need to increase another 50% or more -- and then show they're sustainable gains -- before offshore producers can even consider investing in new oil-field development. As things stand today, there's still too much global production and too much oil in storage.

Seadrill, Seadrill Partners, and Atwood Oceanics all face a common problem: Their existing drilling contracts will only last so long.

For Seadrill, it looks prepared to ride out the rest of 2016 with little problems, though the situation will change once the clock turns to 2017 if new work doesn't start cropping up. Seadrill's biggest problem is its debt load, which requires it to keep more vessels working simply to meet its debt payments, as compared to competitors including Atwood.

Atwood Oceanics has a better balance sheet, but doesn't have much backlog at all to count on and already has a higher percentage of its fleet idle today than Seadrill.

Bottom line: The higher oil prices March brought were a good start, but as we've seen so far in April, they aren't guaranteed to continue going up in the near term, especially as global overproduction and excessive stocks remain a problem. Furthermore and most importantly, oil prices must go much higher before offshore producers start signing big contracts again.

Until the freeze in drilling work starts to thaw -- which could take more than a year to happen -- the offshore industry is probably best avoided.