The S&P 500 took a step back this week, dropping by 1.24%, but investors can't blame the healthcare sector for the fall. In fact, the majority of the most popular exchange-traded funds that focus on healthcare stocks had a great week and posted positive returns. Several of these ETFs were even up by more than 3%, but that still wasn't good enough to match the best-performing healthcare ETF of the week -- the SPDR S&P Biotech ETF (XBI -1.42%). This ETF rocketed more than 5% higher during the period. 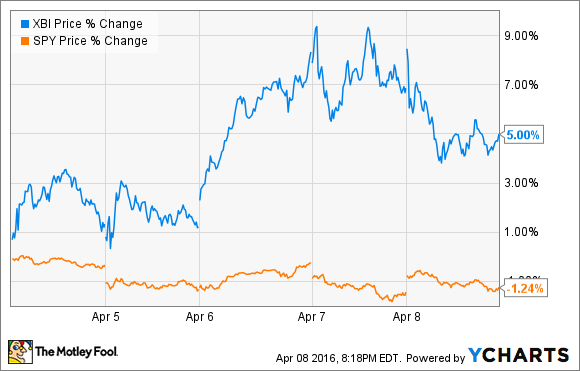 This was the second week in a row that this ETF has put up a monster performance and claimed the title of best healthcare ETF. So what's the secret to this fund's success?

Cracking it open
Since the SPDR S&P Biotech ETF first hit the markets in 2006, it has taken investors on a wild -- though profitable -- ride. This fund has benefited greatly from the big returns out of the biotechnology sector, rising more than 237% over the past decade.

Here's a brief look at what investors get when they put money to work in this fund.

One feature that sets this ETF apart from others is that it uses an equal-weight strategy to allocate its capital. That means the fund invests the exact same amount of capital into each one of the companies it owns. That differs from other ETFs that follow a capitalization-weight strategy, which means larger companies get a bigger portion of the fund's asset pie.

Here's a quick look at the XBI's top holdings.

Last week's top performers
Every single one of this ETF's top holdings ended the trading week in the green, which is an impressive performance when you consider that the markets in general headed in reverse. Two stocks in particular -- Incyte Corporation (INCY -1.08%) and Intercept Pharmaceuticals (ICPT 4.20%) -- made big announcements this week that sent their shares soaring. 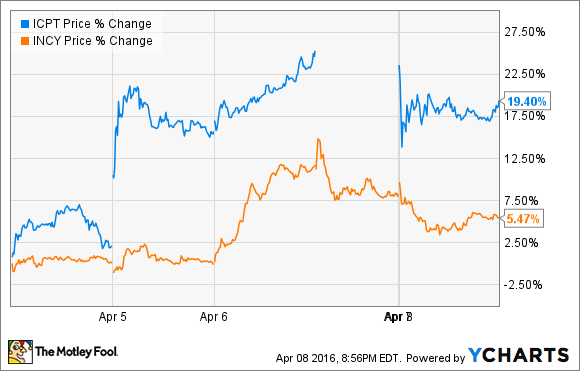 Intercept Pharmaceuticals' stock got a shot in the arm after it announced that an FDA advisory committee had unanimously recommended an accelerated approval of Ocaliva, its compound that is currently pending approval as a treatment a liver disease known as primary biliary cirrhosis. The panel voted 17-to-0 in favor of giving the drug the green light, which bodes very well for its chances when the FDA makes its official decision on May 29. Analysts predict that sales of Ocaliva could eventually reach more then $2.2 billion if it does find its way to market, so you can imagine why investors were so excited when the news hit the wire..

Shares of Incyte Corporation also popped this week, after news broke that its partner Eli Lilly would be returning the rights back to Inctye to further develop Jakafi as a treatment of graft-versus-host disease. Investors cheered the move, which will now allow Incyte to license ex-U.S. rights of Jakafi in this indication to Novartis, its current partner that markets the drug in international markets.

To make the deal happen, Incyte is going to shell out $35 million to Eli Lilly now, and it could be on the hook for additional payments if certain milestones are achieved. Making those payments shouldn't be an issue, as Novartis will have to make payments of its own to Incyte if development of Jakafi goes well.

What's next for the XBI?
With this fund producing stellar results in back-to-back weeks, it's starting to inch its way closer to getting back to even for the year. It still has a long way to go, still down just over 20% year to date. At least that's a lot better than the 38% loss it was sitting on during the middle of March.

Whether or not this fund will continue to rallying in the weeks ahead is anyone's guess, but with its strong history of outperformance and a dirt-cheap expense ratio, this ETF is a great choice for any investor who wants exposure to the biotech sector but doesn't want to buy individual stocks.

Brian Feroldi has no position in any stocks mentioned. The Motley Fool owns shares of and recommends Alnylam Pharmaceuticals. Try any of our Foolish newsletter services free for 30 days. We Fools may not all hold the same opinions, but we all believe that considering a diverse range of insights makes us better investors. The Motley Fool has a disclosure policy.