Please ensure Javascript is enabled for purposes of website accessibility
Free Article Join Over 1 Million Premium Members And Get More In-Depth Stock Guidance and Research
By Jay Yao - Apr 9, 2016 at 9:45AM

Chevron has the right strategy and qualities to ensure that its dividend is safe and its production growth will continue.

In the era of lower for longer, some supermajors have committed themselves to higher risk, longer-tailed development. Royal Dutch Shell (NYSE: RDS-A) (NYSE: RDS-B) closed on its acquisition of BG Group earlier in the year, for example, in large part due to BG's coveted deepwater assets off Brazil. Although BG's deepwater assets will boost Royal Dutch Shell's production for the years to come, they will also require longer lead times and significant capital upfront. The additional requirements could hurt Shell's balance sheet if crude prices stay low.

In contrast, Chevron (NYSE: CVX) is becoming more nimble. Chevron has several capex-heavy projects that will come online over the next few years, and the company is adopting a more flexible growth strategy by focusing on shale production. Chevron's more nimble growth strategy, when combined with its strong balance sheet and competitive cost of production, ensure that the company's best days are ahead of it.

Chevron is suited for the low-energy-price climate because many of its major projects have largely been paid for in terms of cash flow and will come online over the next few years. After tens of billions of dollars of previous investment, Chevron's LNG projects, Gorgon and Wheatstone, will begin ramping up shipments in 2016 and 2017 and will help Chevron achieve 0%-4% production growth in 2016 despite the company's capital expenditure cut and non-core asset divestments. The company expects production to increase for each of the next three years as well.

Chevron's production will also increase because of the company's shorter-cycle, higher-return strategy of investing in shale and tight oil projects, particularly in the Permian Basin, where the company holds 2 million net acres and 9 billion barrels of oil equivalent of potentially recoverable resources. Because of good infrastructure and conducive geology that allows for multiple stacked plays, production in the Permian has skyrocketed over the past five years and has remained strong despite the low WTI prices today. 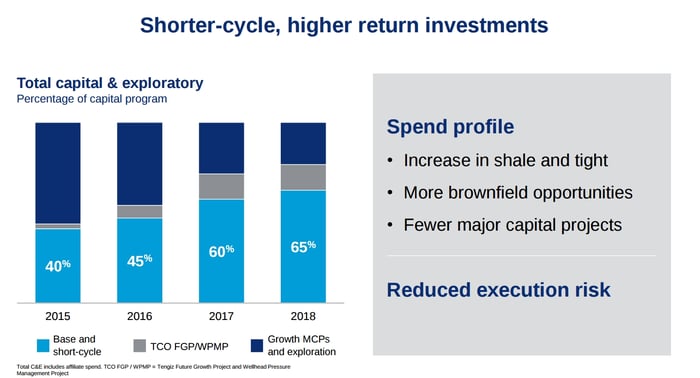 Partly because of the strong Permian production, Chevron's shale and tight oil production rose 30% year over year in 2015 and will continue to grow as the company plans to increase its base and short cycle investing from 40% of its total capital and exploratory budget in 2015 to 65% by 2018. The increased shorter-cycle investments in shale and unconventional fields will give Chevron flexibility to ratchet down costs when crude prices decline and to increase production quickly when prices go up. By more aligning its capex with crude prices, Chevron will preserve its balance sheet and better capture the benefits of rising prices.

Strong balance sheet and competitive cost of production
Chevron also has one of the best balance sheets in the industry. Although it reported negative free capital flow of $16 billion in 2015 and is expected to have a negative free cash flow of $15 billion in 2016 (because of the last year of major investment for Gorgon and Wheatstone), analysts expect Chevron to have a debt-to-capitalization ratio of under 30% by the start of 2018, which is considered good by industry standards. In addition, the S&P credit agency has assigned the company a rating of "AA-," one of the top debt ratings in the sector. 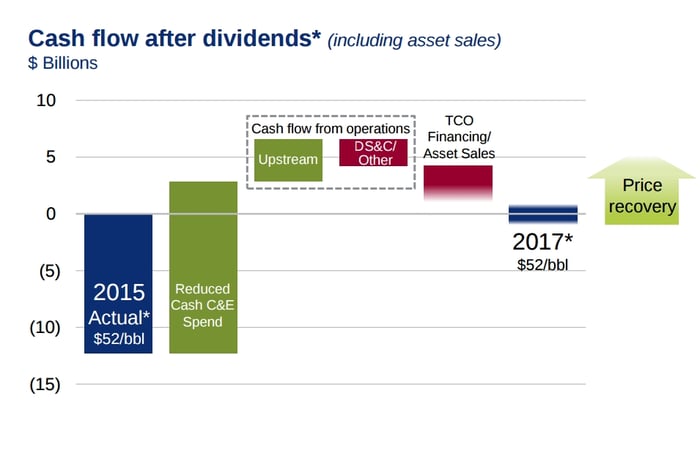 Fortunately, given its low cost of production, Chevron doesn't need prices to rise that much to ensure that its dividend is sustainable. If Brent prices rebound to $52-$60 per barrel in 2017, Chevron will be cash flow-neutral to positive even with its dividend. Given the improving fundamentals in the industry, with the expected 1.2 million barrels per day in crude demand growth and the expected U.S. crude production decline of around 700,000 barrels per day in 2016, $52 Brent by the end of 2017 isn't unreasonable.

Chevron's best days are still ahead
Because Chevron has a flexible shorter-cycle strategy, low costs of production, and one of the industry's best balance sheets, the company is well positioned for the lower-for-longer environment. With a price-to-book ratio of 1.16 and a dividend yield of 4.5%, Chevron stock offers the ideal combination of growth, value, and a stable dividend.