Please ensure Javascript is enabled for purposes of website accessibility
Log In Help Join The Motley Fool
Free Article Join Over 1 Million Premium Members And Get More In-Depth Stock Guidance and Research
By Anders Bylund - Apr 9, 2016 at 11:05AM

Thanks to legal threats dissolving, the cloud-computing pioneer could be getting ready for a return to its old market-beating ways.

What: Shares of ServiceNow (NOW 1.47%) gained 11.3% in March, according to data from S&P Global Market Intelligence.

So what: The maker of cloud-based tools for enterprise IT tasks is untangling itself from a wicked web of legal trouble. The gains in March rested on the settlement of one patent infringement case and rumors about another possible settlement.

The one that's in the books involves infringement claims launched at ServiceNow by Hewlett-Packard Enterprise (HPE -5.85%) in 2014. Along the way, that process invalidated four of the patents Hewlett-Packard's case was built around. The terms of the settlement were confidential, which usually translates into small amounts of money changing hands -- or maybe none at all.

Next, ServiceNow hopes to end another 2014 tussle, this time with head-to-head rival BMC Software. Here, BMC claims to have invested more than $8 billion into developing technologies that ServiceNow allegedly copied for free. So there's a lot of money potentially in play here, and ServiceNow investors would very much like to see this risk go away.

The BMC case was not actually settled in March, but the mere rumor was enough to move ServiceNow shares more than 4% in a single day. The trial was slated to start in mid-March but was given a 30-day stay on the request of both parties. There's presumably some sort of deal in the making.

Now what: With the Hewlett-Packard case properly settled and the BMC trial in limbo, ServiceNow is running low on legal risk factors. Investors can hope to get back on the momentum freight train that drove share prices 500% higher over the last five years, forgetting about the largely stalled chart we've seen since HP and BMC started their patent infringement proceedings.

Meanwhile, the cloud computing business model is paying off. As of the January report, annual sales are rising 47% year over year while free cash flows nearly tripled. These are smooth long-term trends, not one-shot oddities: 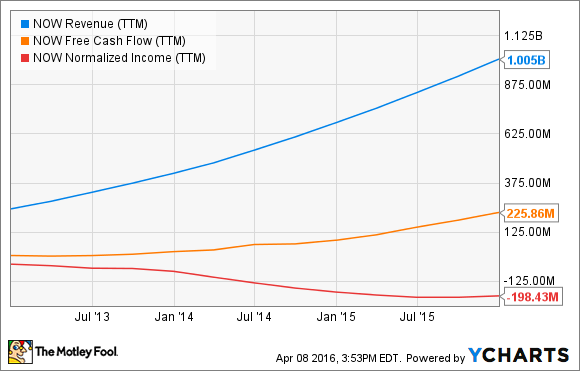 Keep an eye out for a real BMC settlement, probably before the rescheduled trial date. ServiceNow is also scheduled to report first-quarter results on April 20, which should shed some fresh light on everything from legal adventures to free cash flow trends.