As Twitter seals a high-profile deal with the National Football League, how should its shareholders be thinking about it?

As perhaps the most high-profile tech IPO flop in recent memory, struggling microblogging platform Twitter (TWTR 6.35%) is in dire need of a win. 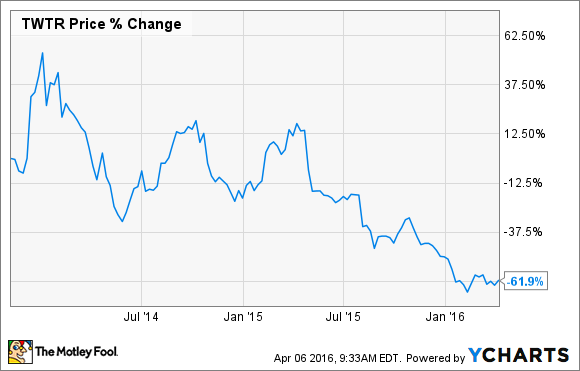 However, as it enters its second decade of existence, its executive team continues to signal that change is indeed in the wind.

Up until this point, such claims appeared more rhetoric than reality. However, with Twitter's recent deal to stream some NFL games in the upcoming season, it appears the first tangible signs of a Twitter turnaround might be blooming like the proverbial May flowers.

Down, set, tweet!
Earlier this week, news broke that Twitter has secured the rights to broadcast 10 Thursday night NFL games during the upcoming season over its microblogging platform, a deal that cost a surprisingly paltry $10 million.

In discussing the deal within Twitter's broader growth strategy, Chief Financial Officer Anthony Noto claimed, "This is one element of a much broader strategy to provide the next generation of real-time content." For those who aren't familiar, Noto also served as the NFL's CFO prior to being hired away by Twitter in 2014. Perhaps the former ties helped seal the deal, since NFL VP Brian Rolapp was later quoted as saying, "We did not take the highest bidder on the table."

In the process, Twitter managed to beat other content-hungry tech and telecom firms including Verizon Communications (VZ -0.49%), Amazon.com, and Yahoo. Though Verizon and Yahoo have both streamed NFL games in the past, some felt the NFL's selecting Twitter represented an effort to use its Thursday night games, which enjoy the smallest viewership each week, to experiment with new distribution channels. For context, many viewed Verizon as the favorite to win the deal in the preceding weeks. However, after Facebook announced it no longer planned to bid for NFL games last week, Twitter was the only true social media firm among streaming rights bidders, which some feel tipped the scale in its favor over Verizon.

A winning deal for Twitter?
As of its most recent earnings report, Twitter held well over $3.4 billion in cash and short-term investments on its balance sheet, making the $10 million price tag for the deal a non-starter. What kind of benefits the company can expect to receive in return is far less clear, though.

In terms of financial returns, it appears Twitter's upside remains somewhat limited. Bloomberg claimed that Twitter will be contractually obligated to show the advertisements from the TV broadcasts, though it will also be able to control at least some ad inventory as well, according to Twitter COO Adam Bain. What's more, it's also difficult to gauge exactly how many users Twitter can plausibly expect to watch the games through its service. Last year, Thursday night NFL games attracted 17 million fans on average. However, with NFL Thursday night games still maintaining their TV broadcast schedules, Twitter figures likely to only draw a fraction of that viewership.

That isn't necessarily a negative since Twitter's primary growth objective involves acquiring new users, rather than simply growing its revenue. As such, integration and execution will be the key. Can Twitter create new, unique ways to highlight the service's value to users watching the game? Past attempts to attract users around live events haven't proven particularly useful. Though user growth data dating so far back isn't available, Twitter's attempts to showcase the service during the 2012 Olympics have long faded from memory. Of course, the company's priorities have shifted dramatically toward product development and marketing since the most recent Olympiad, so the comparison isn't a perfect one, either.

With so much still to be determined, the precise potential benefit for Twitter doesn't make a lot of sense yet. However, especially considering the relatively diminutive financial terms of the deal, Twitter investors should certainly take solace knowing the company and its new leadership are indeed eyeing splashy new partnerships to help reinvigorate its fading growth engine.