Please ensure Javascript is enabled for purposes of website accessibility
Log In Help Join The Motley Fool
Free Article Join Over 1 Million Premium Members And Get More In-Depth Stock Guidance and Research
By Andrew Tonner - Apr 9, 2016 at 9:22AM

In the first article of a series, I put small-business payments processor Square's evolving business model under the microscope.

Tech investors love anything new. However, keeping up with the consistently frenetic pace of change in this space can prove challenging even for the most diehard of enthusiasts.

Recently, a conversation with one of my Foolish colleagues brought to light that, despite being someone who has followed tech daily for more than five years, I knew relatively little about recent fintech IPO Square (SQ 8.52%).

Like most things, investors only expand their circles of competence, to steal from The Oracle of Omaha himself, through concerted effort, which includes reading company filings and research reports. As such, this will be the first in a series of articles unpacking specific aspects of Square, starting with its overall business model.

Circling Square
With a stated, if not lofty, goal "to democratize commerce," Square's business is predicated upon providing payment processing, analytics, and, increasingly, lending capital to merchants. Thanks to a savvy emphasis on technology and design, Square's highly recognizable mobile payment processors have become a mainstay of the mobile economy.

The company offers three core hardware offerings -- the $99 Square Stand, the $49 Square Contactless + Chip Reader, and the free Magstripe Reader -- each of which is supported by the firm's mobile software app, Square Register. Square charges merchants a flat, transparent price of 2.75% per swiped transaction, or 3.5% + $0.15 for each manually entered sale, to use its payment processing technology.

The company has demonstrated impressive revenue growth in recent years, split between several reporting segments. Square's primary revenue contributor is its core Payments Processing business, which accounted for almost 83% of the company's FY 2015 total gross revenue. Sales from its failing processing partnership with Starbucks is its next largest segment, but will end in 2016, making it worth little attention from investors today. Lastly, sales from Square's Software and Data Products group, which includes Square Capital, only comprise about 5% of the company's sales last year, though the firm remains quite bullish on this area of its business (more on this below).

Beyond its basic model, Square's software platform delivers additional functionality that's highly relevant for small-business owners. Here's how the company explained its business model and services in its most recent Form 10-K. 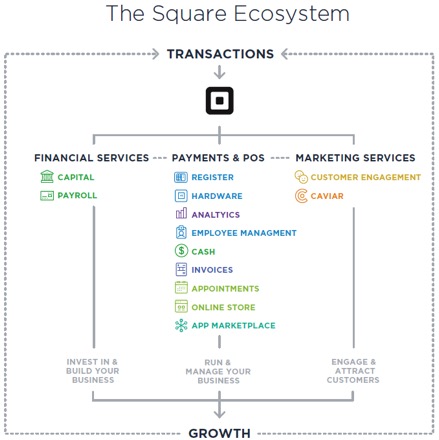 Features include employee management, payroll distribution, calendar scheduling, third-party app integration, and business analytics. Its unique insight into millions of businesses of varying sizes enabled Square to launch Square Capital in mid-2014, which provides working capital advances to qualifying merchants. Square has signaled it is particularly bullish on the lending segment of its business.

In its most recent earnings report, Square reported that Square Capital extended over $400 million in more than 70,000 cash advances to its merchant customers in 2015, and, in a sign of the segment's popularity, over 90% of customers accepted offers for a second advance. However, Square doesn't keep the loans made from Square Capital on its balance sheet. Rather, it simply collects a fee for its part in helping facilitate the merchant advances, making this portion of its business a particularly high-margin segment, which bodes well for the company's continued push toward profitability. For context, Square's core payments processing business typically produces gross margins around 35%, whereas its software segment, which includes Square Capital, enjoys gross margins of roughly 60%.

The company faces competition from a host of players focused on facilitating credit to small and medium-sized businesses, including PayPal (PYPL 5.96%), LendingTree (TREE 13.25%), and more. Here, Square remains well behind the likes of PayPal, though the aforementioned growth in Square Capital should certainly prove encouraging.

Growing player in a massive market
To say the least, Square's business model puts it in the center of a market whose size is measured in the trillions, not billions. According to Square's S-1 filing, card payments in the U.S. alone are expected to increase from a 2013 transaction volume of $4.9 trillion to $7.6 trillion by 2018. Globally, card transaction volume is expected to go from $16 trillion to a whopping $43 trillion by 2023.

However, given the expansive nature of its market opportunity, it should come as no surprise that Square faces competition from a number of well-positioned firms, including PayPal, as well as a hoard of smaller private firms. Additionally, Square's recent move into online payments pits the firm against the likes of Apple Pay, Alphabet's Google Wallet, Amazon.com, and many others. This move alone helps expose Square to a segment of the payments market that is expected to grow at an annual rate of 9.4% in the U.S. through 2018 according to research from McKinsey & Co.

All told, Square remains a relatively minor, but growing, presence in the fragmented, multi-layered global payments market. Continuing the focus on building tools and services that cater to small businesses should help the company continue to grow its market share in this traditionally overlooked portion of the payments procession space. Make sure to check back to fool.com in the coming days for more coverage on Square's valuation at its current levels.