Please ensure Javascript is enabled for purposes of website accessibility
Log In Help Join The Motley Fool
Free Article Join Over 1 Million Premium Members And Get More In-Depth Stock Guidance and Research
By Maxx Chatsko - Apr 9, 2016 at 9:15AM 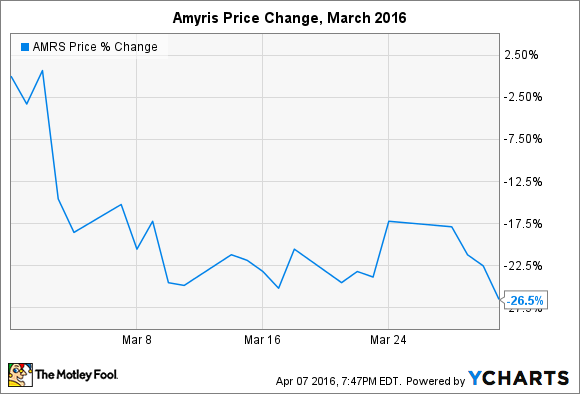 What: Shares of engineered biology and next-generation industrial biotech company Amyris (AMRS 17.62%) plummeted 26% in March due to continued pessimism about the ability of operations to demonstrate long-promised growth.

So what: During the month, the company announced full-year 2015 earnings that failed to impress. Last summer, Amyris management guided for GAAP revenue of at least $63 million, but actual revenue failed to break $35 million -- the lowest since the company pivoted operations in 2012.

A major shipment of a high-value fragrance molecule -- one in a portfolio that underpins much of the growth story for the company -- was delayed in the fourth quarter due to downstream processing missteps from a third party. Meanwhile, bulk sales of the company's cosmetic ingredient squalane suffered from major headwinds for most of 2015.

There are signs of hope ranging from continually falling production costs to the formation of new partnerships, from expanded joint ventures to two newly launched consumer product portfolios. But after years of over promising and under delivering from management, investors are right to be frustrated.

Now what: At the end of 2014, I called Amyris my favorite stock to buy for 2015 because the company had achieved something no other next-generation industrial biotech company had: demonstrated ability to reign in large-scale manufacturing expenses. I figured that would translate into improved margins, increased interest in the platform, and multi-year sales growth. Obviously, that hasn't occurred.

While high growth is still a possibility, the slow pace of execution puts Amyris' future in doubt, with more than $55 million in debt payments due in 2016 alone. That will likely result in more dilution and less flexibility to throw capital at real growth projects.