Even after their recent run-up, both stocks are trading lower than they were a year ago. Is either a buy?

With their stocks falling 8% and 14%, respectively, during the past year, two of the most established names in tech -- International Business Machines (IBM 1.74%), or IBM, and Apple (AAPL 4.08%) -- are trading at very conservative valuations. Which is a better buy? Even more, are they both a buy? 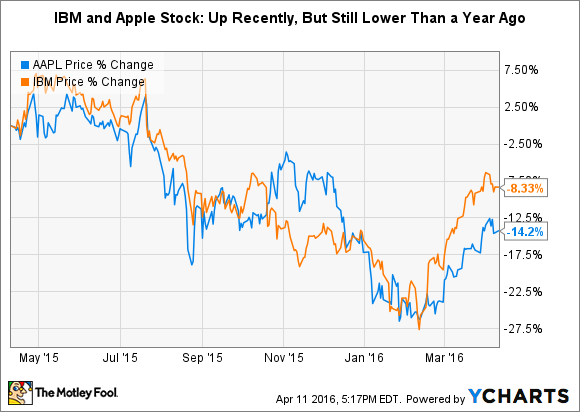 But the playing field levels out a bit when you look at the two company's current outlook for growth. IBM's full-year outlook for flat EPS growth, and Apple's expectations for current quarter revenue to decline from $58 billion in the year-ago quarter to $50 to $53 billion, highlight both company's challenges with growth in the near term.

Longer-term, which company could grow faster? Apple's recent rapid growth at lesast demonstrates it has the ability to grow significantly. But given how concentrated and volatile Apple's product portfolio is, there's more risk to revenue and EPS if one of its key product segments -- particularly its iPhone segment, which accounts for well over 60% of revenue -- faces headwinds. So, when it comes to analyzing both company's growth potential, it's really a question of choosing between IBM's steadier and more predictable business model and Apple's potentially significant growth paired with more uncertainty.

Valuation
Both IBM and Apple have characteristics of a "cheap" stock. The quickest way to illustrate the market's underwhelming expectations for their growth is with their price-to-earnings rations of 11.1 and 11.6, respectively, at the time of this writing. Similarly, their price-to-free cash flow ratios highlight investors conservatism toward their business prospects; IBM and Apple's price-to-free cash flow ratios are 11.1 and 9.6, respectively.

Looking at price-to-earnings and price-to-free cash flow ratios, neither Apple or IBM has a clear edge on the other. But as soon as you turn to the two companies' balance sheets, Apple's war chest begins to give it an advantage. Bolstered by its cash, Apple's price-to-book ratio is just 4.7. This compares to IBM's at 10.1.

Buy both stocks?
When combining the two company's growth prospects and the premiums, or -- more accurately -- the lack or premiums -- the market is awarding them with, I'd dub Apple the better bet between the two. That said, as two established in their respective markets with brands, products, and services that are here to stay for years to come, both Apple and IBM appear to be attractive stocks at their current valuations.