Please ensure Javascript is enabled for purposes of website accessibility
Log In Help Join The Motley Fool
Free Article Join Over 1 Million Premium Members And Get More In-Depth Stock Guidance and Research
By Jay Yao - Apr 11, 2016 at 10:45AM

After rallying over 40% from its February lows, where do Devon Energy shares go from here?

Like so many of its oil and gas peers, the oil crash has forced Devon Energy (NYSE: DVN) to play defense. To protect its liquidity, the company has had to cut its dividend and 2016 capital expenditure budget substantially. To lower its production costs, Devon has laid off hundreds of workers and pruned production in less economical areas. But it's been to no avail. Devon's stock has fallen with its peers, retreating to $18 per share at one point in mid-February.

Fortunately, the whims of the market have changed and crude prices have rebounded from their 2016 lows. Shares of the independent have rallied over 40% since mid-February and have consolidated recently around $25 per share. So let's see whether Devon's rally can continue and what the future holds for the company.

How Devon Energy is similar to its peers
Like other energy companies such as Continental Resources (NYSE: CLR) and Anadarko Petroleum (NYSE: APC), Devon's finances have taken a hit from the low energy prices. Because of the below-$40 WTI and sub-$2 natural gas prices, Devon's fourth-quarter revenues declined 51.9% year over year to $2.89 billion, and its GAAP loss widened to $4.5 billion principally to one-time non-cash asset-impairment charges. Devon's fourth-quarter operating cash flow of $1.081 billion was enough to cover its capital expenditures of $1.079 billion, but not enough to cover the company's quarterly dividend distribution expense of over $100 million.

To ensure that its operations become sustainable, Devon has had to resort to difficult measures. In February, the company cut its dividend by 75% to $0.06 per share to save $320 million annually and slashed its capital expenditure budget by the same percentage to $900 million-$1.1 billion for 2016. Devon plans to sell $2 billion to $3 billion in non-core assets to better protect the balance sheet. The company has made painful layoffs that, when taken in combination with the lower capex budget, will reduce its operating and G&A expense outlook by $800 million annually.

How Devon Energy is different from its peers

Unlike Continental Resources and Anadarko Petroleum, however, Devon's debt is less of a risk.  Although the company had a net recourse debt of $7.7 billion as of the end of 2015, Devon has no significant maturities until December 2018. The company is well capitalized, with a debt-to-capitalization ratio of under 30%, $5 billion in liquidity, and an additional $2 billion to $3 billion of cash it should realize from non-core asset sales this year.

Devon Energy is also in a better position to take advantage of a rebound. As CEO David Hager put it in a recent conference call:

[W]e are probably uniquely positioned with the ability -- with the fact that all of our projects are short-cycle time projects. They're all well oriented projects. We don't have any long-term projects within the company. And so that gives us tremendous flexibility to decrease our capital, such as we've done just now when we're in a very low-commodity-price environment, and the ability to ramp up capital spending and see commensurate results on the production side should we get some encouragement.

Rather than investing in its heavy oil sands operations right now, the company has instead elected to develop its assets that have shorter lead times and lower upfront capital costs before delivering cash flow. That's why Devon Energy's efforts are concentrated in some of the best locations in productive basins, such as the Delaware and Eagle Ford, that have favorable economics and low costs of production. 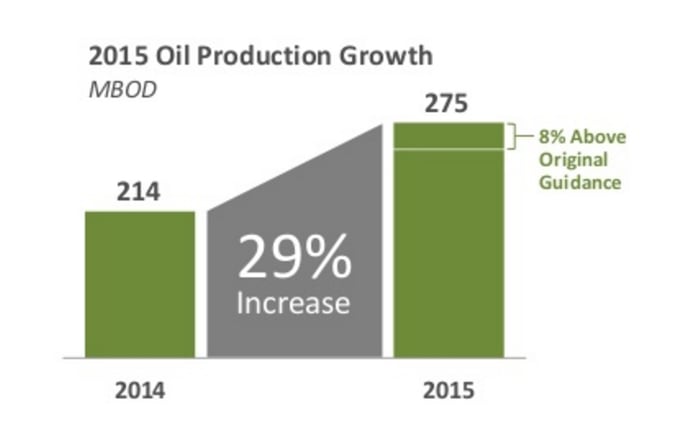 Because the company has "high-graded" production to only the most promising areas, Devon's crude production rose 29% year over year in 2015 despite the low energy prices. If crude prices ramp up to $60 per barrel, many of the marginal wells in the Permian/Delaware Basin and Eagle Ford will become more profitable, providing Devon with substantial cash flow to spend on growth expenditures or to increase its dividend.

What the future holds for Devon Energy
Given that it raised over a billion dollars from a secondary offering in February and plans to divest an additional $2 to $3 billion of non-core assets, Devon's liquidity and debt situation won't be a big worry for a few years. If crude prices remain low, Devon's rally might pause and the its stock might remain depressed but the company will still get by. If crude prices rebound to $50-$60 per barrel, many of Devon's wells in the Permian and Eagle Ford will be profitable and the company will have substantial free cash flow to increase production to take advantage of the company's quality assets. In that situation, Devon's rally could very well continue.