Please ensure Javascript is enabled for purposes of website accessibility
Log In Help Join The Motley Fool
Free Article Join Over 1 Million Premium Members And Get More In-Depth Stock Guidance and Research
By Daniel Miller - Apr 11, 2016 at 9:15AM

While stocks tried to rebound Friday, it was a down week for major indexes. Here are three companies that made big moves last week.

Despite a strong open on Friday, the Dow Jones Industrial Average (^DJI 0.15%) and the S&P 500 (^GSPC -0.81%) still finished last week down 1.21%. The indexes moved higher during early Friday trading, as a surge in oil helped the energy sector significantly. Better yet, expectations are that U.S. production will continue to decline. The general theme for investors last week was moving from safety plays, such as yen and gold, to riskier equities, especially at a time when many are more optimistic about the U.S. economy.

Here are three companies that made big moves last week. 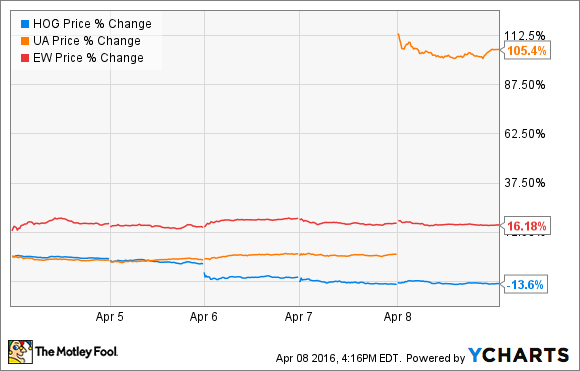 Bumpy ride
It wasn't a great week for Harley-Davidson (HOG -2.20%) investors, with an analyst lowering sales expectations on the motorcycle manufacturer, which sent the stock abruptly lower midweek before continuing its decline through Friday. While Harley-Davidson is still the market leader, it appears that Polaris Industries is stealing market share with its resurrected Indian Motorcycle brand. ITG Investment Research estimates Harley-Davidson will report a sales decline of 7% for the current quarter.

"After relatively stable market share in the first two months of the quarter, Harley-Davidson appeared to lose market share at an accelerated pace ... in March, resulting in an overall market share decline in the first quarter," ITG Investment Research analyst John Tomlinson wrote to investors, according to a USA TODAY article.

Harley-Davidson is in a peculiar spot at the moment. While it's still an industry leader in bikes and owns one of the most recognizable brand images, it's clear that the brand hasn't gained much traction with millennials, which recently passed baby boomers as the most populous generation. That, in combination with Indian Motorcycles' increasing momentum, has investors worried that Harley-Davidson's top and bottom lines could check in weaker when it reports its earnings later this month. Because of those factors, it's not much of a surprise that Harley-Davidson traded nearly 14% lower last week.

Not what it appears
There's a chance that shareholders of Under Armour (UAA -5.99%) were a bit confused Friday as the stock fell. Under Armour is effectively doing a stock split and issuing shareholders one share of its new non-voting Class C stock to go hand in hand with its Class A shares. But what's the strategy behind the move?

In a note to shareholders last year, Under Armour CEO Kevin Plank wrote the following:

"Our current dual-class voting structure is set to end when I own less than 15% of our total Class A and Class B shares outstanding. Dilution from regular employee equity-based compensation and other possible dilution, such as stock-based acquisitions or equity financings, as well as any sales of stock by me, bring us closer to this 15% sunset provision and could ultimately undermine our current governance structure."

So, what this move does is essentially give Plank complete control of the company, which for investors is probably a good move. The board of directors, as well as outside legal and financial advisors, agreed that the founder-led business approach is in the best interests of all involved. If Under Armour's history is any indication, the company is in great hands under the decision-making of Plank, and the stock has been a complete market-crushing investment from the get-go.

High expectations
The S&P 500's best performer last week was Edwards Lifesciences Corp. (EW -1.65%). Its stock price moved 17% higher throughout the week, after the company reported success in two critical trials. Edwards Lifesciences, a cardiac device company, reported that the use of its Sapien heart valve resulted in similar efficacy as open-heart surgery. The rate of all cause mortality or stroke in Sapien patients was 19.3%, compared with 21.1% for open-heart surgery patients at the two-year mark. Even better, those receiving the Sapien XT had an even lower rate of 16.3%.

Also, Edwards Lifesciences reported that transcatheter aortic valve replacements (TAVR) with its Sapien 3 valve was superior to open-heart surgery in intermediate-risk patients. Both announcements are definitely good news for Edwards Lifesciences and its investors, given that these products should continue to fuel its sales and profitability higher.