Please ensure Javascript is enabled for purposes of website accessibility
Log In Help Join The Motley Fool
Free Article Join Over 1 Million Premium Members And Get More In-Depth Stock Guidance and Research
By Daniel B. Kline - Apr 11, 2016 at 10:21AM

The retailer has found a way to compete in an increasingly online world.

The holiday season was not just about getting the hottest and newest items. A strong fourth quarter from Big Lots (BIG -6.04%) showed that people were also looking for bargains.

What: The closeout merchandise retailer reported a strong end to its year on March 4. That sent its stock, which closed February at $40.45, on a strong run ultimately closing out the month at $45.29, a nearly 12% gain, according to data provided by S&P Global Market Intelligence. 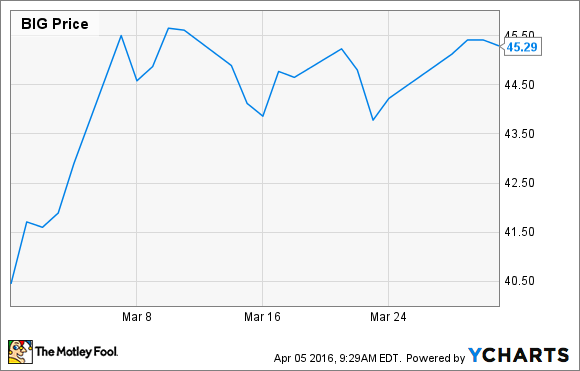 So what: At a time when traditional retailers struggled to compete with the Internet, Big Lots (which does not even sell on its website) had a strong holiday season. The company reported income from continuing operations of $94.7 million, or $1.91 per diluted share, for its Q4, which ended Jan. 30, 2016. The numbers are even better when you exclude a one-time expense of $4.9 million associated with the termination of legacy pension plans.

During the quarter comparable sales for stores open at least fifteen months increased 0.7%, which was actually below the company's guidance of an increase of 1% to 2%. Net sales were down as well, due to the company having fewer locations, but overall the numbers were solid.

"Fourth quarter earnings were at the high end of our guidance range and comps increased for an eighth consecutive quarter, despite the disruption from winter storm Jonas and a later start to the tax refund season for our customers," said CEO David Campisi in the earnings release.

Now what: The company expects to continue its upbeat performance in the coming year:

We estimate fiscal 2016 adjusted income from continuing operations will be in the range of $3.20 to $3.35 per diluted share (non-GAAP), compared to adjusted income from continuing operations of $2.97 per diluted share (non-GAAP) for fiscal 2015. This guidance is based on a comparable store sales increase in the low single digit range and total sales approximately flat. We estimate this financial performance will result in cash flow of approximately $200 million.

Those are ambitious numbers, but there's no reason to believe the retailer, which seems to have found a mix which draws customers into its stores in a day where that has become difficult to do, won't hit them. Big Lots is a discounter, but it's also a bit of an adventure.

Shoppers know the deals will be good but they never know exactly what the merchandise will be. That may be one of the few ways to succeed in physical retail in the face of digital competition and Big Lots appears to have the model down cold.