European sales growth concerns weighed down the cystic fibrosis leader, but the bouncing is far from over.

What: Shares of Vertex Pharmaceuticals Incorporated (NASDAQ: VRTX), a biopharmaceutical focused on discovering, developing, and commercializing therapies for the treatment of cystic fibrosis, fell 11.3% last month, according to data from S&P Global Market Intelligence. 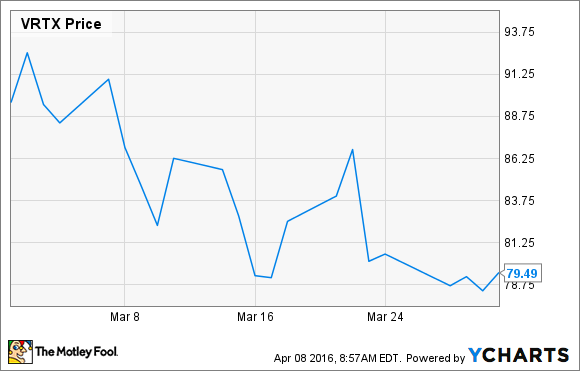 So what: Vertex began 2016 with a string of unsettling announcements, including an annual sales estimate for Kalydeco less optimistic than Wall Street's. News in February that the FDA would require more than the hodgepodge of data submitted in an application to expand Kalydeco amidst a general biotech sell-off was also ill-timed.

However, the single biggest reason for Vertex's slump last month occurred on March 23, when the U.K.'s healthcare spending watchdog announced it would not recommend Orkambi. The National Institute for Health and Care Excellence reasoned that even at a price of about $147,000 -- far less than the $259,000-per-year U.S. list price -- Orkambi didn't "represent good value" despite acknowledging it's the only drug available to delay worsening of symptoms for about 2,750 British cystic fibrosis patients.

Now what: It isn't the first time NICE has issued a draft guidance that doesn't recommend an expensive drug. On the other hand, the institute is also famous for changing its recommendation following further negotiations.

Given the already steep discount to the U.S. list price, investors should be concerned about the knock-on effect NICE's position will have on negotiations with other members of the Eurozone. Unlike the U.S., once a drug earns marketing approval from the European Commission, it can take years to hammer out reimbursement agreements one by one throughout each EU nation.

The response shouldn't have been surprising. Vertex expected lengthy European negotiations after Orkambi earned marketing approval last November. Management clearly stated that it expected Orkambi sales to remain limited to the U.S. and Germany throughout 2016, when it reported fourth-quarter earnings.

Last year, the company more than doubled its product revenue from $488 million to over $1 billion. While you might expect such a leap in the top line to lead to a profit, it didn't. The Vertex mission to treat as many of the estimated 75,000 cystic fibrosis patients in North America, Europe, and Australia, as quickly as possible is as expensive as it is bold. Last year the company lost another $558 million.

What the market needs to know is what kind of contribution Vertex can expect from Orkambi in the quarters ahead. Soon the company should announce the FDA's acceptance, or refusal, of an application that would expand Orkambi's label from patients over 12 years old, to children between ages 6 and 11 with the same genetic markers already indicated on the label. If eventually approved, this would expand the number of eligible patients in the U.S. from 8,500 to about 10,900.

From its launch last July through the end of 2015, Orkambi sales figures disappointed the market. When Vertex reports first-quarter earnings -- likely near the end of April -- all eyes will be looking for hints of increasing Orkambi uptake. You can expect the stock to bounce accordingly.