According to an Israeli newspaper, a major shareholder is considering selling its stake in the company.

What: Shares of Caesarstone Sdot-Yam (CSTE -2.38%), a manufacturer of engineered stone surfaces, jumped on Tuesday. The only piece of news that could be driving the stock higher is a report from Israeli newspaper Calcalist stating that Sdot Yam, a kibbutz in Israel, was considering selling its remaining stake in the company. At 11:45 a.m. ET, the stock was up about 11.5%.

So what: This news of a potential sale comes a few months after a proxy battle between the company and Kibbutz Sdot Yam began. The kibbutz has sold around $300 million worth of shares over the past three years, according to the company, leaving it with a roughly 33% stake. It's unclear why the stock rose by so much on the news.

Shares of Caesarstone have tumbled over the past year, with the stock down about 37% even after Tuesday's jump. The stock took a steep dive following a short attack in August 2015 from Spruce Point Management, and it has yet to fully recover. 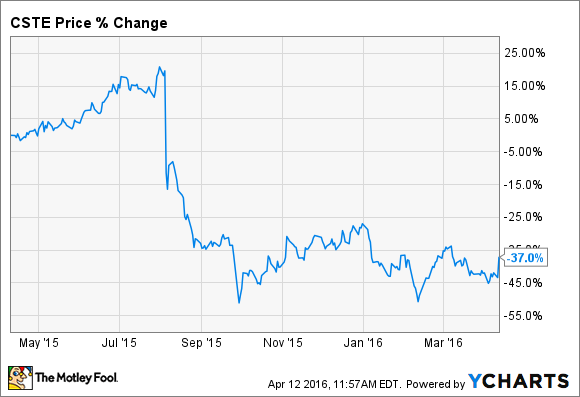 Now what: This news seems mostly like a non-event, and perhaps the beaten-down stock price has something to do with the outsize reaction. Caesarstone is expected to report its first-quarter results in early May, and the company may have more to say at that time.