Please ensure Javascript is enabled for purposes of website accessibility
Log In Help Join The Motley Fool
Free Article Join Over 1 Million Premium Members And Get More In-Depth Stock Guidance and Research
By Todd Campbell - Apr 13, 2016 at 8:03AM

Worries over payer pushback on sky-high prices have taken a toll on many healthcare stocks, but some stocks are bucking the trend and rewarding investors with eye-popping returns. Among the best performing of these stocks are these three companies, all of which have needle-moving catalysts on deck. Are these stocks still worth buying after their big runs higher? Let's take a closer look. 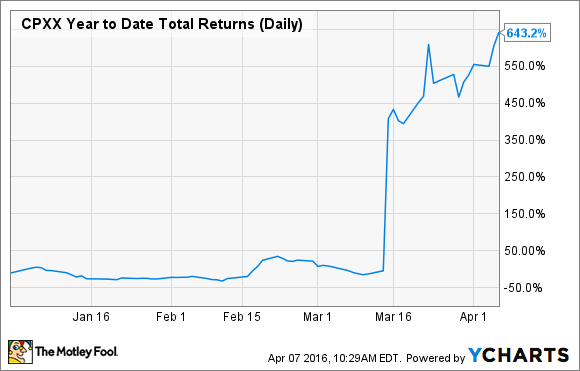 Celator Pharmaceuticals entered this year as an afterthought. However, phase 3 data, showing that its optimized formula of the 7+3 chemotherapy regimen often used to treat acute myeloid leukemia (AML) significantly outpaced the current regimen, has led to a jaw-dropping return of nearly 650% this year.

Enthusiasm for this optimized therapy, Vyxeos, may not be misplaced. The 7+3 regimen has been commonly used in this tough-to-treat indication for decades. and up until now, there have been few advancements in treatment in this indication.

In phase 3 trials, Vyxeos patients' overall survival was 9.56 months, far better than the 5.95 months for the 7+3 regimen. Importantly, Vyxeos appears to offer similar safety to 7+3, too, and that could mean doctors embrace it as a new standard of care. If so, then Celator Pharmaceuticals' current $491 market cap may still be too low.

Of course, Vyxeos success depends on the company's winning over regulators, and investors won't know if that happens until next year. Celator Pharmaceuticals' management plans to file for U.S. approval in the third quarter and EU approval in 2017.

Because those filings haven't happened yet, investors should undeniably approach this company cautiously. However, given the opportunity to reshape patient treatment, risk-tolerant investors might want to consider it. 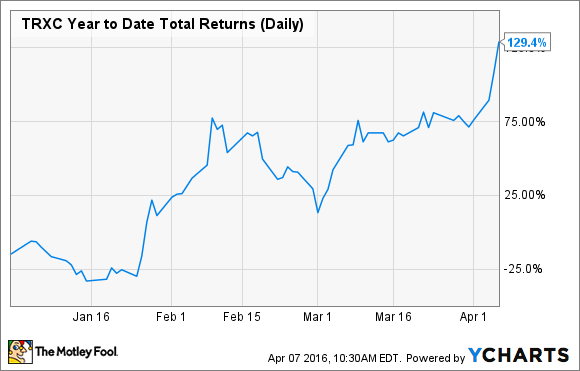 The company is awaiting FDA clearance to begin marketing its SurgiBot in the U.S., and if it's granted, TransEnterix believes that a price tag that's a third of Intuitive Surgical's da Vinci and a feature set that includes haptic feedback and the ability to move it from room to room will allow it to compete for market share.

TransEnterix is mounting a challenge to Intuitive Surgical's position overseas, too. It acquired the ALF-X system from SOFAR S.p.A last year, and although that system has failed to make a dent in Europe since notching the CE mark of approval in 2011, TranEnterix thinks a sales team led by former Intuitive Surgical sales leaders could change that.

The market for robotic surgical systems is big and growing (Intuitive Surgical's sales were $2.3 billion in 2015), but there are some question marks that may warrant having investors take a wait-and-see approach to this company.

First, Intuitive Surgical's tightly tied in with its large installed customer base, and therefore it may be hard to dislodge it from its customers' sites. Second, smaller hospitals that may like SurgiBot's price point may still struggle to find the money in their budget to buy it. Third, there's no guarantee the FDA will green light SurgiBot. Finally, the company's a bit tight on cash, and that could present struggles if its launch doesn't go smoothly. 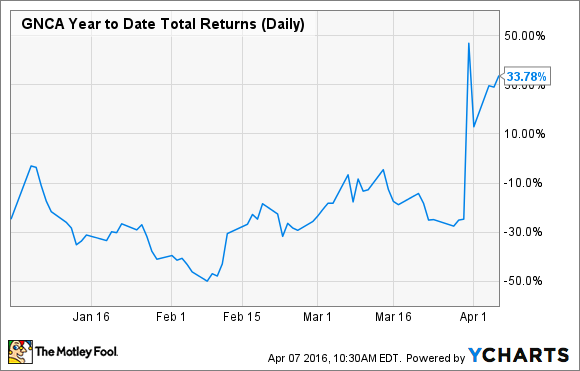 Earlier this month, the clinical-stage biotech company announced results from a midstage patient study showing that one single dose of GEN-003 may be as effective at reducing lesion occurrences as daily suppression therapy.

Specifically, GEN-003 patients had a significantly lower rate of viral shedding over the 12-month period following administration of the drug, something that could significantly lower the rate of transmission of genital herpes. Additionally, study results suggest a 47% to 65% reduction in the rate of genital lesions at the 12-month mark, versus baseline. Overall, between 21% and 30% of patients receiving GEN-003 were lesion-free one year later, a rate that's in the ballpark of the 34% rates delivered in clinical trials by daily suppressible therapy.

If Genocea Biosciences can duplicate those results in a phase 3 confirmatory study (one is planned for 2017), then it thinks it could have a billion-dollar opportunity on its hands. If so, then its couple-hundred-million market cap may be a bargain.

Nevertheless, there's still a lot that could derail this drug from here, and the company's cash stockpile is small enough for me to think a dilutive offering could be on the horizon. Therefore, this remains a risky bet suited only for those who could endure a complete failure in its late-stage trial.