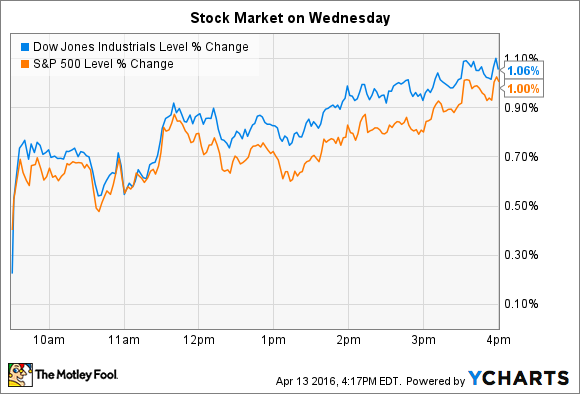 The moves pushed both indexes further into positive territory for the year and left the Dow just 2% below the all-time high it set last May.

JPMorgan's not-so-bad quarter
JPMorgan Chase was the Dow's biggest gainer, logging a 4% jump after the banking giant posted surprisingly strong first-quarter results. Top- and bottom-line figures both worsened when compared to the prior year, but not by as much as Wall Street had feared.

That success offset much of the sting from lower investment banking and trading revenues. Meanwhile, JPMorgan's exposure to an oil and gas industry that's navigating plunging commodity prices convinced management to set aside $1.8 billion for potential credit losses, or about double last year's result.

JPMorgan's outlook calls for a maximum $5 billion hit from energy-related loan losses this year, which would still leave the company in a strong enough financial position to fund increasing cash returns to shareholders, mainly through stock buyback spending.

GoPro described Coster as "a core member of Apple's elite design team," and one who will now "influence all aspects of design at GoPro ... including hardware and software and services." The new hire starts working at the end of April and will report directly to CEO Nick Woodman.

An injection of fresh design perspective should help GoPro make its devices and software solutions easier to use, which was a problem Woodman highlighted after sales growth and profitability plunged last quarter. That's especially true considering that Coster's perspective is backed by 20 years of experience working for the most successful consumer electronics maker on Earth.

GoPro's more immediate problem is getting its operating results back on track. Woodman and his executive team project sales will fall by 50% in Q1 even as profitability sinks to 36% of sales from 45% last year.

Here's Why You Should Approach Walt Disney Stock Like Peter Lynch

Will Chewy Disappoint Investors on Wednesday?