The MLP still has a hefty debt load and a maturity wall to overcome.

Boardwalk Pipeline Partners (BWP) was one of the first MLPs to realize that distributing virtually every penny it made to unitholders wasn't a viable long-term strategy. So, with its debt ballooning and a boatload of capital projects in the pipeline, it slashed its payout in early 2014 in order to reduce its leverage and fund its growth. It's a similar path that is now being followed by natural gas pipeline kingpin Kinder Morgan (KMI 1.19%).

Unfortunately, for Boardwalk Pipeline Partners' investors after two years the company still has a hefty debt load and a lot of projects to fund, which is preventing it from being in the position where it can restart distribution growth. That's something investors need to keep in mind before investing in this company.

A funding gap to fill
When Boardwalk Pipeline Partners cut its distribution by 80% in 2014 it did so because market conditions in the natural gas pipeline sector were starting to weaken, which was forecast to negatively impact its cash flow. That had the potential to push its debt-to-EBITDA ratio even further above its target of 4.0 times at a time when the company needed capital to fund growth projects that it had in the pipeline. Its plan was to retain a large portion of its distributable cash flow and use that to help fund these growth projects so that it could keep its leverage from growing out of control.

Unfortunately, two years later and the company is pretty much right where it started with its leverage ratio still quite elevated and well above its initial target: 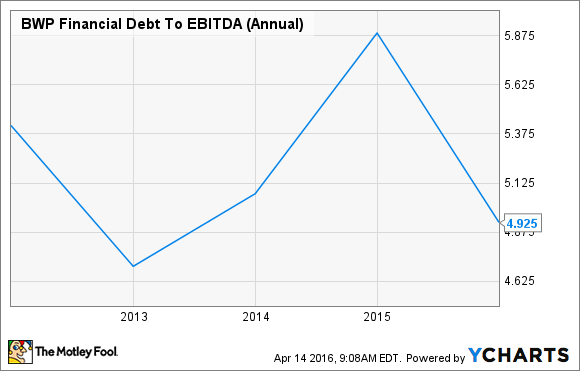 That's a bit of a concern given that the company still has $1.6 billion of projects still scheduled to go into service over the next couple of years. While these projects will grow the company's earnings once brought online, the bulk of these investments are a year, or more, from paying off. In fact, its largest two projects, the $310 million Northern Supply Access Project, and the $720 million Coastal Blend Header Project, aren't estimated to go into service until the first half of 2017 and 2018, respectively. That means the company has a huge funding commitment ahead of it before it will see a return on these capital dollars.

A maturity wall still to climb
In addition to funding these capital needs Boardwalk Pipeline Partners has maturing debt to contend with before these growth projects start delivering increased cash flow. As the chart below shows, the company has more than $800 million in upcoming debt maturities that need to be addressed over the next two years: 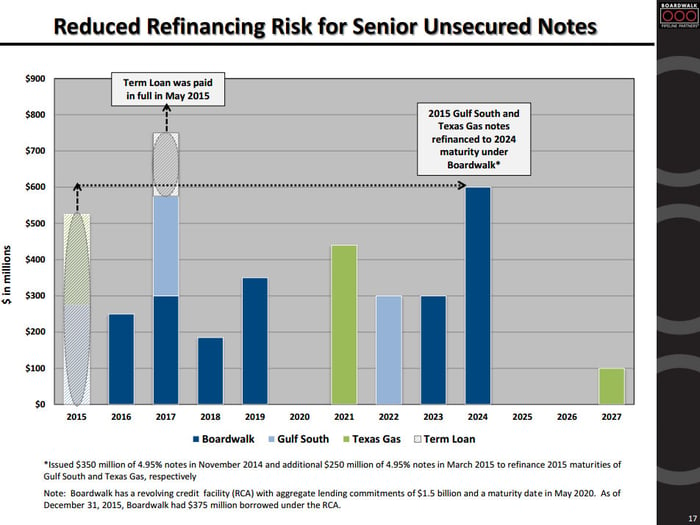 While the company didn't have any trouble addressing its 2015 maturities by refinancing two notes and paying off a term loan, those refinancing were completed before the credit markets went haywire in late 2015 due to the deepening of the energy market downturn. Credit conditions are so tight right now that companies like Kinder Morgan have seen their access to credit significantly constrained, which is a key reason why it decided to significantly reduce its dividend and use that cash to fund its capex instead of a balance of debt and equity. In fact, Kinder Morgan needed to borrow $1 billion from its banks instead of the bond market just to have the cash to refinance its upcoming debt maturities because the bond market was no longer offering favorable terms.

The concern for Boardwalk Pipeline Partners is that it has to both refinance its debt maturities as well as fund a significant capex plan over the next two years at a time when capital is tight within the energy sector. While the company should be able to access the credit it needs to refinance its debt, the terms might not be as good as it has received in the past, especially considering that its leverage ratio is still pretty elevated. That means the company will likely need to continue conserving cash until its gets over this maturity wall.

Investor takeaway
Boardwalk Pipeline Partners has a big funding commitment and a pretty large maturity wall to overcome during the next two years. Worse yet, this financial commitment is coming at a time when the energy market is growing worse. That combination of factors will make it very tough for the company to have the financial capacity to increase its distribution any time soon, which is something investors need to keep in mind before buying units of Boardwalk Pipeline Partners.