Please ensure Javascript is enabled for purposes of website accessibility
Log In Help Join The Motley Fool
Free Article Join Over 1 Million Premium Members And Get More In-Depth Stock Guidance and Research
By Leo Sun - Apr 15, 2016 at 10:18AM

Have both telco stocks risen too quickly over the past year?

Last year, I bought shares of AT&T (T 0.66%) and Verizon (VZ 1.10%) as defensive income generating plays for a volatile market. I didn't expect either stock to rally, but shares of AT&T and Verizon respectively rose 18% and 6% over the past 12 months -- easily outperforming the S&P 500's 2% decline.

But now that both stocks are sitting at multi-year highs, is it too late for new investors to start a position? Let's take a look at both companies' valuations, tailwinds, and dividends to decide. 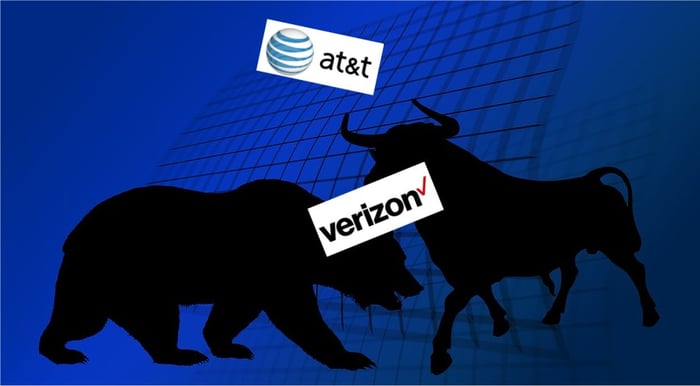 Historical valuations
The first metric most investors will check is the trailing P/E ratio. AT&T currently has a P/E of 16, while Verizon has a P/E of 12. Both ratios are lower than the average P/E of 20 for the domestic telecom industry and the S&P 500's current P/E of 23. The following chart of AT&T and Verizon's P/E ratios over the past five years also indicates that both stocks remain at fairly "cheap" historical levels. 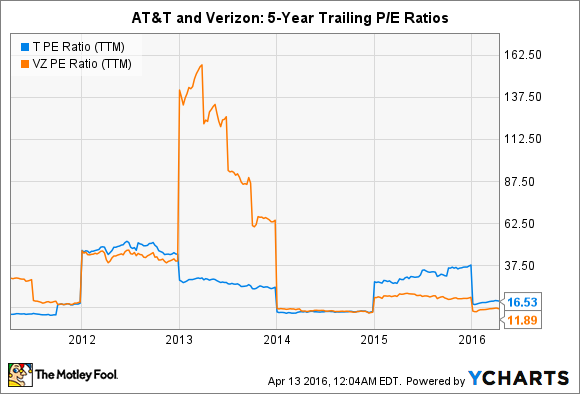 AT&T and Verizon both need to generate lots of free cash flow to fund dividends and buybacks. In 2015, AT&T's free cash flow rose 60% to $15.9 billion, thanks to its acquisition of DirecTV. Verizon's free cash flow, excluding proceeds from tower sales, rose 40% to $18.8 billion last year.

To ascertain how cheap AT&T and Verizon are relative to their FCF, we should use the EV/FCF ratio. The following chart reveals that both companies' EV/FCF ratios have spiked to multi-year highs, although they have gradually declined over the past year. 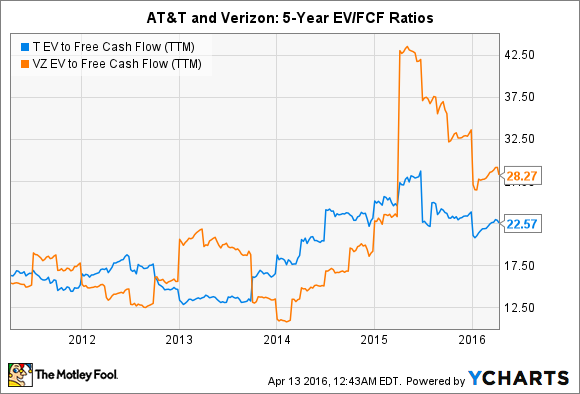 AT&T and Verizon's EV/FCF ratios have risen due to higher debt loads impacting their enterprise values. AT&T took on debt to finance its acquisitions of spectrum licenses and DirecTV, while Verizon spent billions on spectrum licenses and its purchase of AOL. However, revenue from DirecTV, new wireless customers in Mexico, and the potential divestment of Latin American assets should keep AT&T's debt levels manageable. Verizon can do the same by divesting more of its slower-growth wireline businesses.

Forward valuations
Looking ahead, analysts expect AT&T to grow its earnings 5% this year and for Verizon's to stay roughly flat. AT&T and Verizon both trade at around 13 times forward earnings, so both stocks are trading at a premium to their earnings growth potential.

Over the next five years, AT&T is expected to grow its earnings 5.1% annually, which gives it a 5-year PEG ratio of 2.7. Verizon is expected to grow its annual earnings 4.5% during that same period, which gives it a higher PEG ratio of 2.9. Both ratios indicate that investors should expect slow earnings growth, since neither ratio comes close to dipping below the "undervalued" PEG threshold of 1.

Dividend yield
However, most investors don't buy AT&T and Verizon because they think they're "value" stocks -- they buy them because they pay big and steady dividends. AT&T has hiked its dividend annually for over three decades, while Verizon has done the same for nearly a decade. AT&T currently has a yield of 4.9%, while Verizon has a yield of 4.3%. Both payouts are significantly higher than the S&P 500's average yield of 2.1%. 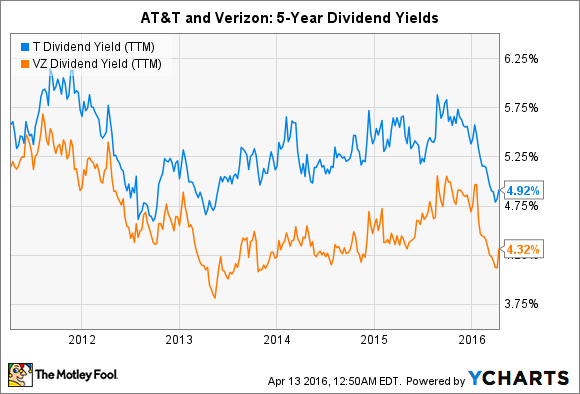 To many investors, income generating stocks like AT&T and Verizon only become "overvalued" when their price growth causes yields to dramatically decline. AT&T and Verizon's yields have indeed fallen slightly, but their 4%+ yields still remain above multi-year lows. Over the past 12 months, AT&T has paid out 64% of its FCF as dividends, while Verizon has paid out 76% -- meaning that both companies still have plenty of room to boost their payouts.

But if you're an income investor like me, AT&T and Verizon's hefty yields and rising cash flows remain impressive. Therefore, I think AT&T and Verizon are neither cheap nor expensive. Instead, I believe that both telco stocks are still "fairly" valued based on their earnings growth potential and dividend yields, and it still isn't too late for new investors to jump aboard.