Please ensure Javascript is enabled for purposes of website accessibility
Log In Help Join The Motley Fool
Free Article Join Over 1 Million Premium Members And Get More In-Depth Stock Guidance and Research
By Daniel B. Kline - Apr 15, 2016 at 3:30PM

One is an established multi-industry leader while the other is trying to fight its way into the cable and broadband business.

Verizon Communications (VZ 0.44%) makes Frontier Communications (FTR) look tiny. The company dwarfs its fledgling rival in broadband and pay-television service,  being a top wireless carrier. In fact, Frontier is only as big as it is because Verizon sold it 3.3 million voice connections, 2.1 million broadband connections, and 1.2 million FiOS video subscribers in California, Texas, and Florida for $10.54 billion.

That transaction roughly doubled Frontier's size, while Verizon has more than 9 million broadband customers, nearly 6 million cable subscribers, and a massive 112 million retail wireless connections, according to the company's Q4 earnings report. Being big, though, has its risks, as Verizon has much farther to fall than Frontier -- and the possibility of that occurring is not entirely out of the question.

Clearly, Verizon is the bigger company, with a longer track record, while Frontier stands as the upstart looking for a place at the table. 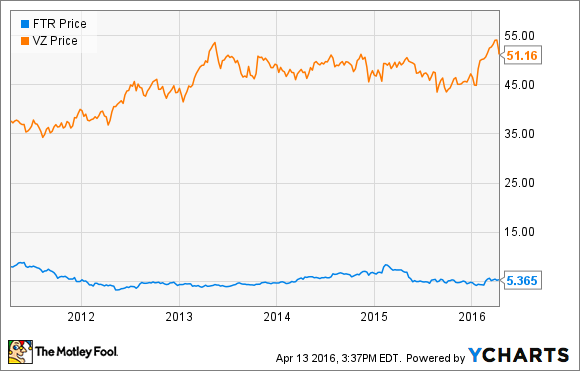 A case for Frontier
Anyone buying Frontier stock buys into the notion that the existing cable and broadband players are doing a bad enough job that room exists for an alternate. In all its markets, Frontier operates against more-established competitors, generally by offering better deals.

That might be a sensible strategy because the existing large cable and broadband players are not exactly well liked by the public. That opens the door a crack for Frontier, which might be able to kick it open fully by being cheaper than the established market leaders.

It's hard to know if this strategy will actually work, but it has been at least somewhat successful for Verizon and AT&T, which have used it to build a cable and broadband customer base in various parts of the country. That should mean Frontier at least has a chance -- and if you believe that, you can buy into the company very cheaply.

Frontier is a big risk. The company has taken on billions in debt to buy its toehold in these markets. But if it can hold onto the customers it has bought in the face of cord-cutting and aggressive competition, it could become a player.

A case against Verizon
The biggest risk to Verizon's share price -- and it's a significant one -- is that the improving networks of its low-cost wireless rivals either causes customers to leave, or forces prices down. That was not a threat in the past because Verizon had the best network by leaps and bounds. Now, the company may have a lead with its network, but it's a shrinking one that's increasingly irrelevant because everyone else has gotten good enough.

As a company that uses the phrase "better matters" in its ads, Verizon is very vulnerable to the fact that it really doesn't anymore. So far, the public has not really caught on to that; but as T-Mobile (TMUS 0.90%) specifically continues to aggressively tout its own network, as well as its cheaper prices and consumer-friendly policies, consumers may start to understand.

If that happens, the bottom could fall out for Verizon. People will pay more for wireless service that they see as more reliable; but they won't pay if they can get the same thing or better for less elsewhere.

Which is the better buy?
Frontier has more upside, but it also has much more risk. It could grow into a major player, pay down its debt, and become a viable consumer alternative -- but it has not proven any ability to do that. So far, the company has simply bought customers, and has shown no ability to grow its audience based on its own marketing.

Verizon, on the other hand, would need a lot to go wrong for the bottom to fall out. Consumers, as a whole, move slowly, and after years of believing that Verizon has a better wireless network, the majority of them will likely still believe that, even though T-Mobile tells them otherwise. The company is not likely to grow much, and it will face rate pressure in all its business segments, but its chances for continued decent financial performance, or a slight improvement, are much stronger than Frontier's to hit it out of the park.

Frontier has a puncher's chance, but Verizon is an example of slow and steady wins the race. That makes Verizon a less-sexy stock, but a better buy.