Please ensure Javascript is enabled for purposes of website accessibility
Log In Help Join The Motley Fool
Free Article Join Over 1 Million Premium Members And Get More In-Depth Stock Guidance and Research
By Anders Bylund - Apr 15, 2016 at 11:50AM

The chip giant expects revenue growth but flat or declining earnings in the first quarter.

Intel (INTC -0.80%) reports first-quarter results after the closing bell on Tuesday, April 19. Here's what to expect from the giant semiconductor designer and manufacturer.

By the numbers
Official guidance targets point to first-quarter revenue of roughly $14 billion, approximately 9% above the comparable 2015 period. GAAP gross margins are seen contracting from 60.5% to 58%, while operating expenses should rise 14% to $5.6 billion.

The client, data center, and Internet of things divisions will remain largely unchanged, with the first two accounting for the lion's share of Intel's total sales and operating profits. In the recently reported fourth quarter, their respective revenue contributions stood at 58% and 29%.

The brand-new programmable solutions group consists of the recently closed Altera acquisition. In the first quarter of 2015, Altera pulled in revenue of $436 million.

Intel has chosen to break out its NAND flash memory operations from the "other" segment for the first time, even if the business is too small to require this treatment. This is a long-running joint operation with NAND specialist Micron Technology (MU -2.32%). The venture is known as IM Flash Technologies, and too small for detailed reporting from the Micron side as well. The memory expert chooses to roll its Intel-flavored memory sales into the storage business unit.

Finally, the old "software and services" division is now known as the Intel security group, built around the McAfee merger in 2011.

So investors will get a bit more transparency out of Intel now, chiefly from the Micron venture and the newly acquired Altera assets. 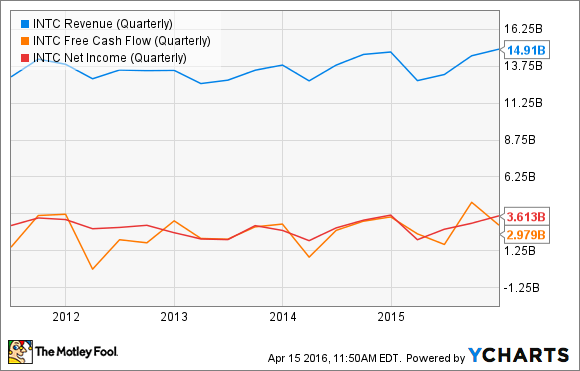 Industry news
Intel is always sensitive to the relative health of the PC systems market. On that note, Micron's report the other week pointed to weak demand from PC builders, resulting in soft next-quarter guidance but solid results for the reported period.

The trends reported by sector peers like Micron and Seagate will surely affect Intel's business as well, though it is hard to say by how much. Intel's PC sales are supported by a dominant role in server system processors, and further buffered by satellite operations like the Internet of Things division, security software, and that new Altera-based programmable chips group.

This report should give investors a good idea of exactly how far Intel can remove itself from troubling PC market trends. Stay tuned.