A goofy new jacket sheds more light on why Under Armour has been so successful.

Under Armour (UAA 2.48%) has patented a one-armed jacket, designed to keep a baseball pitcher's throwing arm warm. That seems gimmicky, but it actually illustrates two key factors that allow the company to continue to succeed. With this patent, Under Armour's underdog ethos and marketing savvy are on full display. 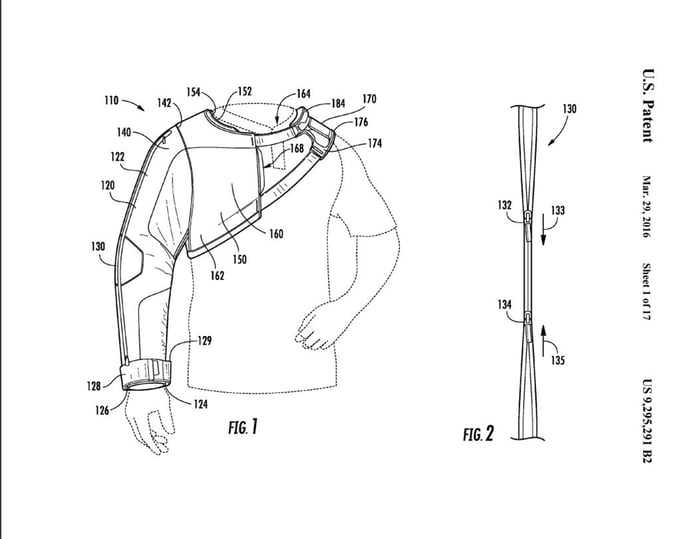 It's easy to get complacent
Other companies had been making T-shirts for athletes much in the same way for decades when Under Armour CEO Kevin Plank invented a better mousetrap. His T-shirt didn't balloon from 6 ounces when dry to around 3 pounds when soaking wet. This first product, which has become synonymous with moisture-wicking shirts, laid the groundwork for everything that has come since.

Any number of companies could have directed their R&D budgets toward fixing this problem, but a twentysomething in his grandmother's basement beat them to it. Hunger, ability to challenge norms, and fear of being squashed by competitors are common attributes of young companies, but they often fade as they grow into mature ones. The greatest companies find ways to merge the benefits of success -- access to capital, brand awareness, stability -- with the upstart mentality that got them there in the first place. This patent shows me, in some small way, that Under Armour is becoming one of those companies.

When pitchers sit in the dugout between innings, they often wrap their throwing arm in a mess of towels or awkwardly wear a half-off jacket. It's not the biggest problem in the world, but Under Armour has patented an elegant solution. Maybe this will prove to be a fad or a product blunder, or maybe we'll look back in disbelief in 2040 -- as all pitchers wear this style of jacket -- that such a simple solution wasn't used in the '80s, '90s, and early 21st century. Under Armour focuses on big goals -- China, basketball, signing superstars -- but it doesn't let the details pass it by.

From $8,000 all the way to Jordan Spieth
Three executives, including CEO Kevin Plank, once had to take out $8,000 from an ATM to pay a golfer to wear Under Armour clothes for the weekend at The Masters. Under Amour now has the world's top golfer, Jordan Spieth, signed to a deal that's been estimated at around $200 million. Under Armour has shown that it will flex its financial muscle to sign the likes of Spieth, NBA MVP Stephen Curry, NFL MVP Cam Newton, and MLB MVP Bryce Harper, but it still shows hints of the guerrilla marketing skills that first got it into the game.

These one-armed jackets will almost certainly never be material to the company's earnings, but they could prove to be a shrewd marketing move. I see two possible ways that the product can benefit Under Armour.

If MLB pitchers start to wear them, it will draw the attention of fans and announcers -- the goofiness is actually a good thing here -- who will talk about them and mention Under Armour in the process. It's hard to beat free advertising. While competitors might be buying commercial spots in between innings, Under Armour will be mentioned during the game.

The long-shot benefit would be if the jackets are shown to materially enhance pitching performance. It may seem unlikely, but elite athletes operate on the slimmest of margins. Reducing sweat a tiny amount or being able to put the jacket on more quickly after coming off the mound could have some tiny impact on performance. In a profession where being an inch off with a pitch could be the difference between an out and a home run, and where the landscape is littered with nine-figure contracts, every advantage is important. Under Armour already has one of the game's top pitchers, Clayton Kershaw, under contract, and having him use the gear would be a great start.

I feel as confident as ever in Under Armour's future and plan on holding this stock for decades. The jacket probably doesn't mean much, but it's an important glimpse into how the company plans for its future, constantly focuses on innovation, and finds ways to get publicity without breaking out its checkbook in a big way.