If you're looking for some hot dividend stocks for your portfolio, here are three to consider.

Investing in Dividend Aristocrats -- an exclusive group of companies that have raised their dividends for at least 25 consecutive years -- is one of the smartest ways for income investors to reap rich returns in the long run. As Dividend Aristocrats have rewarded shareholders irrespective of business conditions, they can also act as an excellent hedge in today's volatile times.

Rich Smith: Nucor Corporation (NUE -3.26%) has been paying -- and raising -- its annual dividend for 42 straight years, which makes this steel maker a Dividend Aristocrat by any definition. It's also a pretty darn good-looking stock, period.

Oh, I know. Priced at 44 times earnings, Nucor isn't what you'd ordinarily call a "cheap stock" at first glance. But here's the thing: When you stack Nucor up against rivals like Steel Dynamics, U.S. Steel, or Arcelor Mittal, none of these other steel makers are earning any profits at all. The fact that Nucor is profitable, even if not quite profitable enough to give it an obviously cheap P/E, is already pretty remarkable.

And now here's the real kicker: According to S&P Global Market Intelligence figures, last year, Nucor generated nearly $1.8 billion in positive free cash flow from its business. That's roughly five times as much cash profit as gets reflected on the company's income statement as "net income" under generally accepted accounting principles. And if you factor both debt and cash into the valuation picture, $1.8 billion in positive free cash flow is enough money to give Nucor an enterprise value-to-free cash flow ratio of almost precisely 10.0.

Now, take that valuation and divide it by the stock's total return -- a 7.5% projected long-term growth rate, plus the 3.2% dividend that made the company an "aristocrat" -- and what do you get? Well, you get a stock selling for an EV/FCF/Growth ratio below 1.0. While no single metric makes a stock a buy, it does lead one to an interesting conclusion: Despite its high P/E ratio, Nucor is actually one very attractively priced aristocrat.

Travis Hoium: When I think about a Dividend Aristocrat stock, I think about a company that has a consistent and growing dividend, but also is in a business that can't easily be disrupted. We've seen technology and international competition take a bite out of some of the most iconic dividend stocks in the world, as I highlighted recently.

And that's why I'm so impressed by Stanley Black & Decker (SWK -2.61%). The company has paid a dividend for 139 straight years, and has increased its dividend for 48 straight years. That's the kind of consistency investors should look for.

Just as importantly, Stanley Black & Decker makes industrial products we'll need for the foreseeable future. Drills, wrenches, fasteners, and hydraulic tools are just a small list of the company's products. And they're needed to make everything from your furniture to the road outside your house. A computer or a technology invention also won't easily replace the company's end market, primarily construction. 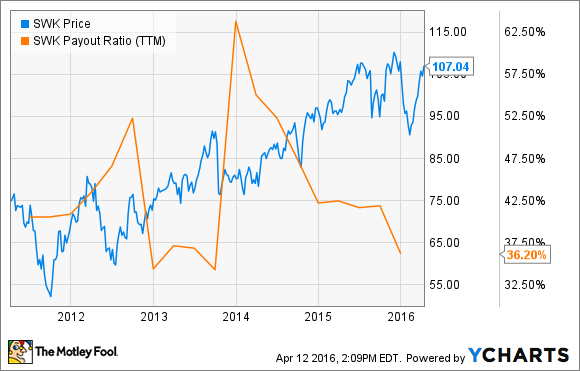 Neha Chamaria: Illinois Tool Works' (ITW -0.28%) dividend yield of 2.1% may not be among the highest out there, but its dividend track record is nothing less than astounding: The company has increased its dividend for 52 straight years, and has grown its dividend at a compounded average rate of 11% since 2012.

Illinois Tool Works' biggest strength, perhaps, lies in its diverse portfolio that serves several key industries, including automotive, construction, electronics, food equipment, and specialty products. The diversification allows the company to grow its profits and cash flows in both good and bad times. 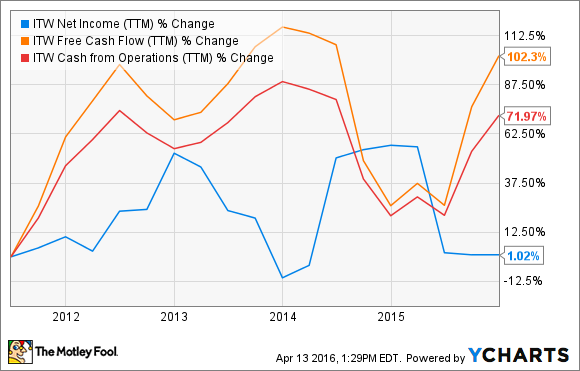 The low payout is, ironically, great news for dividend investors, as it should help the company grow its dividends even if profits were to stagnate or decline in coming years. Investors needn't worry, though, as Illinois Tool Works expects its earnings per share to grow 6% at the midpoint this year, even as several industrial heavyweights are struggling to maintain profits amid macro headwinds. That alone should give income investors the confidence to consider Illinois Tool Works for the long term.